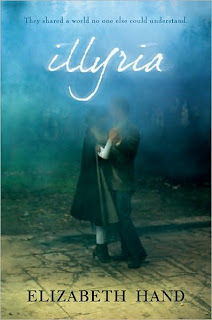 Madeleine and Rogan are first cousins from a large family whose lives intertwine beyond just the usual ways: they are each other’s first loves, and they both have a passion for the theatre. As they participate together in their school’s production of Shakespeare’s Twelfth Night, changes force them to evaluate their relationship, as well as what the future holds for them, both together and apart.

ILLYRIA was far from what I expected. I wanted something slim yet fulfilling, with a magic that is solidly grounded in reality. Instead, I felt no connection to the characters, and felt like the author was trying to go for mood instead of engagement, with the end result that neither was accomplished.

Content aside (because there have been other YA books written about incest), how is ILLYRIA a YA book? It reads like the work of an adult author who chose to write about teenaged characters without any real consideration for the emotions that teenagers may feel. Madeleine and Rogan’s togetherness lacked actual affection, both in the way Rogan treated Madeleine and the way Madeleine narrated their relationship with an old-woman-at-her-confessional manner. Characters spoke to one another with no real purpose behind their conversations except—well, in my opinion, except to fill up the pages, to give off a “mysterious” vibe at their ambiguous feelings and statements. And I hate hate hate when things in stories only appear for the purpose of accomplishing something—in this case, the author’s unrealized intention of creating an eerie yet compelling atmosphere throughout the novella.

ILLYRIA could have been an interesting, subtly magical, and deeply unsettling story. I think, however, that it was definitely marketed to the wrong audience, and thus I can’t commend it as a work of YA literature.

Cover discussion: Oh, but the cover I do like. It captures the "magical realism" intention perfectly--like intruding on this couple's lives by scrutinizing them through a dusty snowglobe.

Personal copy.
Posted by Steph Su at 9:30 AM

Email ThisBlogThis!Share to TwitterShare to FacebookShare to Pinterest
Labels: elizabeth hand, review, YA