A Wrinkle in Time, that crazy, weird, intense work of children's literature that, if you read it when you were a child, was probably your first introduction to science fiction and time travel, is turning 50 this year. 50 YEARS OLD! That's practically GRANDMA AGE! Whoa. With the blindingly speedy shelf turnover rate for YA bookshelves these days, 50 years is nothing to scoff at. To celebrate, Farrar, Straus and Giroux has released a gorgeous 50th anniversary commemorative edition of A Wrinkle in Time, and Big Honcho Media has put together a massive blog celebration, celebrating 50 years of A Wrinkle in Time over 50 days and 50 blogs.

As a stop on the blog tour, I am writing today about... 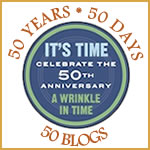 Remembering My First Experience with A Wrinkle in Time...

Like many lucky readers, I read A Wrinkle in Time for the first time when I was probably 9 or 10 years old. Here are the few things I remember myself reacting to upon that first read-through:

lol. Back in the day when books had these sorts of covers. I'm not sure what I found more laughable/sad at 10 years old: Meg's glasses and mousy brown hair (I apologize: an ignorant fourth grader, and would have rather that Meg had straight hair, like me), the centaur-like creature, or the lilies that they are all holding.


...And Revisiting It Now

Rereading A Wrinkle in Time a few days ago, in a way, pulled away the mystical shroud that always seemed to surround this title. This wasn't a favorite of mine when I was younger, though I was definitely glad I read it. But, in rereading A Wrinkle in Time, I rediscovered just how much a work of children's literature can accomplish. Doubtless I absorbed half of what this book contained in terms of themes and motifs when I was 9. Now, however, I understood more of what Madeleine L'Engle wove into this iconic story: the need for humanity to be aware of and to resist the easy ways of evil, how heroes and heroines can be made of the most unexpected people, and the power of love to defeat the bad.

I always love rereading my favorite childhood books, but this time, I realized even more what children's literature can do: to plant the seeds of important thoughts and morals into the minds of children without them being aware of it, to be explored and nourished as the child grows and lives and learns and experiences more. Anyone who says that children's and young adult literature is not important because of their audience should reread some children's lit classics. We were all children once, which is why it is so crucial for the formative years to be filled with rich, exciting, imaginative, adventurous, emotional, and thought-provoking literature.

To anyone who belittles those who work in the fields of children's and young adult literature, I pity you. Really. There's a magical and beautiful formation of the truest and most essential human spirit that can develop in childhood and adolescence. Far from needing less children's literature, less education, less professionals in these fields, we need much, much more. It is the people who grew up reading great works of children's literature that can add to the goodness of the world.

Check out A Wrinkle in Time's Facebook page, and see the list of other blogs participating in this blog tour here.

A Wrinkle in Time: 50th Anniversary Commemorative Edition will be available in hardcover from Farrar, Straus and Giroux on January 31, 2012.
Posted by Steph Su at 8:00 AM