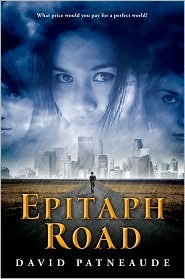 In 2067, a potent virus known as Elisha’s Bear wipes out 97% of the world’s male population. Thirty years later, women have rebuilt the world into a much better place than it was before the Bear. In this structured world, 14-year-old Kellen Dent feels like an isolated freak, with all the women’s suspicious eyes on him. Part of him longs to head into the wilderness and join his solitary fisherman father.

Then Kellen discovers that a recurrence of the Bear threatens his father at the mostly-male community he lives in. Along with two female friends, cousins Tia and Sunday, Kellen journeys to find his father and warn him of the impending viral outbreak before it’s too late. In doing so, however, they discover the truth behind the Bear, their society as it is, and a future threat that they must stop before all hell breaks loose.

EPITAPH ROAD is an entertaining, though not spectacular, dystopian read that creatively imagines a world gone awry from the actions of men (war, rape, etc.) and rebuilt with the capable—albeit misguided—hands of women. The story is creative, yet feels incomplete in some areas.

Kellen’s world takes a while to build up, but it ends up being a fairly realistic portrayal of what the world could look like if we continue on our irresponsible paths. David Patneaude envisions a world destroyed by the actions of men and turns sexism on its head: it was interesting to see women’s reactions to Kellen, as if he—a rather mild-mannered-to-the-point-of-being-maybe-boring-and-generic male narrator—could be held accountable for centuries of destruction. While the 21st-century history lessons felt rather laundry listed, they provided a helpful timeline for the reasoning of the existence of Kellen’s world.

Unfortunately, EPITAPH ROAD was not as engaging as I wanted it to be, on account of a lack of complete development across all important fields. The concept of Kellen’s world is disconcertingly plausible, but parts of it failed to take into account the believable passage of time—for example, how have things such as the climate changed a hundred years from now? How have people adapted their lifestyles to accommodate such unfathomable natural evolutions? A few fancy electronic gadgets thrown in does not a futuristic world make. In addition, the story seemed to rely too much on the fanciful idea of its dystopia and thus allows neither the main characters nor the plot to be fully fleshed out. Kellen, Tia, and Sunday often felt like stage actors playing their way through the action and narrow escapes, and the majority of the story did not lead up to its “apocalyptic threat” climax.

Ultimately, EPITAPH ROAD is not a standout example of dystopian lit, but its mix of action and “ungendered” interactions (i.e. little romance to “bog it down”) will make it a good read for young male readers who are on the brink of discovering authors like Scott Westerfeld.


Cover discussion: 3 out of 5 - See, now, this is, like, HIGHLY evocative of a movie promotion poster. Which just kind of makes me laugh, because, like most movie posters, this one totally does not capture the feel that I felt this book wanted to take: that of danger, and, uh, a dystopia.

ARC received at NCTE.
Posted by Steph Su at 5:00 PM