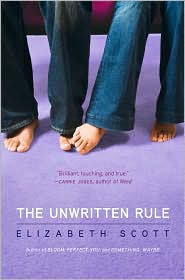 Everyone knows that you shouldn’t like your best friend’s boyfriend. But what if she starts dating the guy whom you liked first? That’s Sarah’s problem. Her best friend, the gorgeous but troubled Brianna, has started dating Ryan, the guy that Sarah has had a crush on for years. Ryan is the most wonderful guy Sarah has known, but Brianna deserves love in her life, and so Sarah walks quietly behind them, secretly wanting Ryan. When things turn even more complicated, though, Sarah must learn the extent—and the limitations—of love, and just which ones exactly are worth it.

Elizabeth Scott knows how to get to a wide range of readers’ hearts, and her sixth novel is no exception. THE UNWRITTEN RULE is a quick but emotional read that—despite some construction problems—will easily hit home.

The book could’ve easily been another telling of the ages-old girl-likes-forbidden-guy trope, but Elizabeth Scott skillfully weaves in a complex family subplot makes it a fresh story—and gets our attention. The published synopsis fails to mention that Sarah’s justified concern for Brianna’s emotional well-being and what kind of love her friend deserves is the result of Brianna’s painful relationship with her parents. As a result, we can see that the typical YA contemporary love triangle can have more depth to it than just adolescent “tru luv” feelings. THE UNWRITTEN RULE beautifully illustrates the painful complications of love, and what it means for someone to deserve—or not deserve—love, and to what extent love can be used as an excuse for hurtful behavior.

But THE UNWRITTEN RULE is also flawed in the same way as Scott’s other books. Each individual element of this story—each character, subplot, or event—works well on its own, but combined together, something feels…off. Sarah has been in love with Ryan forever, and when he talks he’s a pretty nice guy, but “nice” doesn’t equate to love: I wanted, and didn’t get, to see the reasons for her crush on him. Brianna’s parents are cruel in their behavior towards her, but their cruelty almost seems like a caricature, a placeholder for the neglectful and woefully underdeveloped parent. And Sarah’s almost feisty one-on-one conversations with Ryan border on vibrant and flirtacious, while at every other time in the book she’s so passive a snail could take advantage of her. While I thought the individual scenes were powerfully emotional, they never extracted themselves from the “staged play” feel and into an effortlessly realistic story.

Along the same lines, Sarah’s character developed infuriatingly little throughout the course of this book. I loved the progressive revelations on the different kinds of love and relationships, but she really barely changed from beginning to end. If her lack of definite personality was an attempt at making her more of a relatable everygirl, the attempt failed. I was left feeling like I had gotten a glimpse into the complex world of conditional love, but the narrator’s passivity ensured that I could never be fully invested in the book. I liked the story’s message, but the story itself was too easily forgettable.

I have no doubt that THE UNWRITTEN RULE will appeal to fans of Elizabeth Scott, because it contains the usual amount of emotional insight and angsty-but-still-lovable characters that she is famous for. However, critical readers will be bugged by these subtle yet significant weaknesses. Nevertheless, THE UNWRITTEN RULE makes for an easy and still overall enjoyable read, perfect for a day when you don’t desire human interaction but don’t want to merely lie in bed, zombie-like. Believe me, it’ll make you feel like an involved member of society without needing to leave the confines of your state of solitude. And sometimes that’s what you really need.


Cover discussion: 4 out of 5 - There's just something about it that I love. I understand that the fixation on feet (and kinda ugly feet at that) can be construed as odd...but the purple? You can't tell me that's not to drool over.

Copy received from author for review.
Posted by Steph Su at 10:00 AM

Email ThisBlogThis!Share to TwitterShare to FacebookShare to Pinterest
Labels: 3, elizabeth scott, review, YA