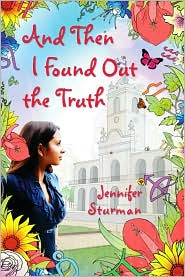 And Then I Found Out the Truth by Jennifer Sturman
**WARNING: potential spoilers regarding Book 1, And Then Everything Unraveled**

Delia Truesdale is still searching for the truth about her mother, who is in hiding somewhere in South America. But for now, Delia has to make do with her mystery-solving in New York City, alongside her Aunt Charley (a downtown hipster), her Aunt Patience (an uptown ice queen), a detective with a questionable taste in neckties, an eccentric psychic, her brainiac friend, and Quinn, the wealthy, gorgeous boy who--gasp!-- seems to return Delia's affections. Too bad Quinn's shady CEO dad may be involved in the scheme Delia is trying to crack. And a trip to South America may be in order after all...

Last summer, a little-known book about a disappearance and an environmental conspiracy and living in NYC stole my heart, even more so when the author, Jennifer Sturman, turned out to be supremely nice and accommodating in agreeing to an interview and helping me host a giveaway. Since reading And Then Everything Unraveled, I have been impatiently waiting for its sequel to arrive. I want to know what happens with Delia's mom! I want to know more about the conspiracy! I want Delia to have more slightly awkward encounters with her aunts and her classmates and her crush. I want her to do more amateur sleuthing! (Can you simply taste my excitement?)

And Then I Found Out the Truth will be published in hardcover by Point, a division of Scholastic, on July 1, 2010.
Posted by Steph Su at 9:00 AM