In My Mailbox is a weekly meme inspired by Alea and hosted by Kristi. See Kristi's blog to see what other bloggers got in terms of books this week!

I wasn't going to post an IMM this week due to me being away from my primary address (i.e. on spring break back at my parents' house), but due to extraordinary circumstances I have great things to show for this week! Yippee!

Best. Birthday. Ever. At least, it was supposed to be. With Logan's band playing a crucial gig and Aura's plans for an intimate after-party, Aura knows it will be the most memorable night of her boyfriend's life. She never thought it would be his last.

Like everyone born after the Shift, Aura can see and talk to ghosts. This mysterious ability had always been annoying, and Aura had wanted nothing more than to figure out why the Shift happened so she can undo it. But not with Logan's violet-hued spirit still hanging around. Because Dead Logan is almost as real as ever. Almost.

It doesn't help that Aura's new friend Zachary is so understanding--and so very alive. His support means more to Aura than she cares to admit.

As Aura's relationships with the dead and the living grow ever complicated, so do her feelings for Logan and Zachary. Each holds a piece of Aura's heart...and clues to the secret of the Shift.

SQUEEEEE. I absolutely love Jeri's adult WVMP Radio paranormal series, and I'm so super excited to read this one. I've been waiting on this forever!

Claire is having the perfect sixteenth birthday. Her pool party is a big success, and gorgeous Matthew keeps chatting and flirting with her as if she's the only girl there. But that night, she discovers something that takes away all sense of normalcy: she's a werewolf.

As Claire is initiated into the pack of female werewolves, she must deal not only with her changing identity, but also with a rogue werewolf who is putting everyone she knows in danger. Claire's new life threatens her blossoming romance with Matthew, whose father is leading the werewolf hunt. Now burdened with a dark secret and pushing the boundaries of forbidden love, Claire is struggling to feel comfortable in either skin. With her lupine loyalty at odds with her human heart, she will make a choice that will change her forever.

I've seen this book around but until now had never thought much of it. The more I read the synopsis, the more intrigued I am, though! 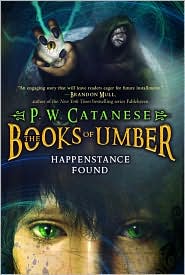 Twelve-year-old Happenstance awakens in a cave with no memory of who he is or how he came to be there. Soon a mysterious trio arrives to take him away: the explorer Umber, the shy archer Sophie, and Oates, whose strength and honesty are both brutal. Hap and his new acquaintances narrowly escape the cavernous underworld and make their way to Lord Umber's bustling jewel of a harbor city, Kurahaven.

Once there, Hap learns that Lord Umber is an extraordinary man — he's a merchant, adventurer, inventor, royal adviser, and chronicler of all things monstrous and magical. But Umber's accomplishments can't answer the question closest to the boy's heart: Who is Happenstance?

Desperate to uncover clues in his new, baffling surroundings, Hap accompanies Umber on dangerous and unusual missions. But Hap soon learns that there are powerful enemies inside the kingdom, and a ruthless assassin is hot on his trail. Faced with many unknowns, Hap knows one thing is certain: There's a reason Umber has chosen him...if only he could determine it.

P. W. Catanese's richly spun fantasy chronicles one boy's quest for answers and hope in a world riddled by knowledge and power corrupted. 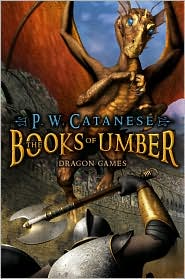 Happenstance would like nothing more than to stay in the comfort of the Aerie, Lord Umber's spectacular cliffside home, without having to worry about the secrets of his past — or the undetermined role he must play in Umber's desperate mission.

But adventure beckons when Umber receives two mysterious messages. One is a desperate plea for help from Caspar, the man who stole precious documents from Umber's archives that could unlock the mysteries of Hap's powers. Caspar is trapped on a forbidden island, the victim of a nightmarish curse. He is willing to reveal his secrets to Umber and Hap — but what he demands in return may be impossible to achieve.

The second message is from an oppressed kingdom ruled by a brutish monarch, where an old rival of Umber's has stolen a cache of dragon eggs. The eggs have begun to hatch, and the question is, what do they plan to do with those infant dragons?

I've never heard of this series, but it sounds pretty fun! Only problem is when am I gonna find time to read it? :(

So this is the reason I'm doing an IMM post this week. In this wonderful indie bookstore's e-newsletter, I learned that they were starting a new program where you could "check out" store-received ARCs for FREE, returning them whenever you had the chance (no time limit). They have a whole bookshelf full of of Spring 2010 ARCs. I restricted myself to the following four, otherwise I knew my reading schedule would be even more wacked up!

The Shifter is an immortal creature bound by an ancient spell to protect the kings of Samorna. When the realm is peaceful, she retreats to the Mistwod. But when she is needed she always comes.

Prince Rokan needs Isabel to be his Shifter. He needs her ability to shift to animal form, to wind, to mist. He needs her lethal speed and superhuman strength. And he needs her loyalty--because without it, she may be his greatest threat.

Isabel knows that her prince is lying to her, but she can't help wanting to protect him from the dangers and intrigues of the court . . . until a deadly truth shatters the bond between them. Now Isabel faces a choice that threatens her loyalty, her heart . . . and everything she thought she knew.

This was pretty much the reason I stopped by the Doylestown Bookshop today... and they had it! So giddy, so giddy. (Remember my Waiting on Wednesday post on it?)

A Most Improper Magick: The Unladylike Adventures of Kat Stephenson by Stephanie Burgis
(Atheneum / June 15, 2010)

Twelve-year-old Kat Stephenson may be the despair of her social-climbing Step-Mama, but she was born to be a magical Guardian and protector of Society--if she can ever find true acceptance in the secret Order that expelled her own mother. She's ready to turn the hidebound Order of the Guardians inside-out, whether the older members like it or not. And in a society where magic is the greatest scandal of all, Kat is determined to use all her powers to help her three older siblings--saintly Elissa, practicing-witch Angeline, and hopelessly foolish Charles--find their own true loves, even if she has to turn highwayman, battle wild magic, and confront real ghosts along the way!

This book sounds incredible! I've been pining after it ever since I heard about it.

In Caitlin's world, everything is black or white. Things are good or bad. Anything in between is confusing. That's the stuff Caitlin's older brother, Devon, has always explained. But now Devon's dead and Dad is no help at all. Caitlin wants to get over it, but as an eleven-year-old girl with Asperger's, she doesn't know how. When she reads the definition of closure, she realizes that is what she needs. In her search for it, Caitlin discovers that not everything is black and white—the world is full of colors—messy and beautiful.

Last year, all of Belly's dreams came true and the thought of missing a summer in Cousins Beach was inconceivable. But like the rise and fall of the ocean tide, things can change--just like that. Suddenly the time she's always looked forward to most is something she dreads. And when Jeremiah calls to say Conrad has disappeared, Belly must decide how she will spend this summer: chasing after the boy she loves, or finally letting him go.

It's no secret that I loved the first book in this series, The Summer I Turned Pretty. So I'm so thrilled to have found this one there. Although the back-cover synopsis seems like a sobfest waiting to happen... *is excited*...

Thank you so much, Doylestown Bookshop!
I also bought the following books from the Book Barn near my hometown:
Vampire Kisses: The Beginning by Ellen Schreiber
Twelve by Lauren Myracle
The Lace Reader by Brunonia Barry

Eeee so excited! I want to start reading all of them NOW!
Posted by Steph Su at 11:43 PM