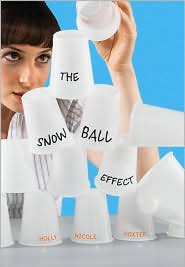 Lately, people have been doing a good job of leaving Lainey Pike’s life. A few months ago, her stepfather Carl was killed in a motorcycle accident. Then her beloved maternal grandmother died of avoided terminal illnesses, and then her mother hanged herself several days after Lainey’s high school graduation, leaving her with her adopted 5-year-old brother, Colin. Lainey’s older half-sister, Vallery, moves back in with them, but Lainey still feels her life spiraling out of control. Her relationship with her perfect long-term boyfriend Riley hits the rocks, and she starts seeing another, totally different guy. What will it take for Lainey to begin to feel more like herself again?

THE SNOWBALL EFFECT is an endearing debut novel that explores the different types of enduring—and finite—relationships that are necessary in life. Its wonderful characters are hindered by a plot that seems to move around in circles with no satisfying closure, but on the whole it is an enjoyable read with a unique moral.

Lainey is a relatable, though not always likable, protagonist. Her no-nonsense narration flows smoothly and never feels forced in the shadow of all the tragedy and hardships that have befallen her. THE SNOWBALL EFFECT is a character-driven novel with a memorable cast of characters—even if not all of them have been thoroughly developed in the text. Besides Lainey, her boyfriend Riley is the strongest character, albeit a static one. His consistency and domestic intelligence is an assuring light in the alley of Vallery’s pouty tantrums and Colin’s inexplicable development problems.

I would have liked THE SNOWBALL EFFECT to have more of a distinguishable plot arc. Lainey works through her stages of grief in the changing ways she deals with her interpersonal relationships, but her life is mostly stagnant, and the “revelation” event near the end of the novel is never fully satisfying as a resolution-forming climax.

THE SNOWBALL EFFECT is refreshingly different from your typical “coming to terms with grief” YA novel. If you have a pragmatic outlook on life, like your contemporary YA readable, and don’t mind dealing with a circling plot for those characteristics, then you’ll really enjoy your book. THE SNOWBALL EFFECT should be a book that finds its ways into the hands of girls with so-called unprivileged backgrounds, for socioeconomic status is strong in this novel and fills a sorely underrepresented bracket in YA lit.


Cover discussion: 1 out of 5 - Um... NO!!! This looks like it was pieced together out of a number of low-quality clipart pictures. The fake "blue-screen" background, the girl's awkward expression and arm posture, the completely unrealistic way in which she's still stupidly concentrating on placing one more cup on top of a pyramid that's already fallen down. Come on. I can't believe this got past a teen advisory board...did they even run it by a test YA audience? Shame on you, art director, for this mess of a cover. Do-over.

ARC won from author's blog giveaway.
Posted by Steph Su at 9:30 AM