Really, one of the few problems with book blogging is just the sheer unreasonableness of the ratio of books read to books that one wants to read. Every week, my wishlist increases until there's no possible way I can WoW each and every one of them individually. So since BEA is--yeeeeiiiikeeesss!!!---next week (!!!), I'm going to talk about just a handful of books that I'm hoping I'll be able to find there.

Please note that this is just a sliver of the books on my BEA wishlist. I'm aware that I have a habit of always wanting to root for the underdogs, so I often try to WoW books that I haven't seen being very much publicized elsewhere before. But now, I'm going to indulge in my more mainstream desires, because these books are cool too and deserve all the attention they've gotten already. Wheeee!

Sixteen-year-old Evie's job is bagging and tagging paranormals. Possessing the strange ability to see through their glamours, she works for the International Paranormal Containment Agency. But when someone--or something--starts taking out the vamps, werewolves, and other odd beasties she's worked hard to help become productive members of society, she's got to figure it out before they all disappear and the world becomes utterly normal.

Normal is so overrated.

This has an almost very "adult urban fantasy" premise, and Evie sounds like she will be an assertive and kickass protagonist. I can totally get behind that! And also, I'm pretty sure that the day after I saw this cover for the first time, I had a dream that inspired an idea for a possible future short story... So yeah, good karma all around. I'm definitely interested in reading this one!

While other teenage girls daydream about boys, Calla Tor imagines ripping out her enemies’ throats. And she wouldn’t have it any other way. Calla was born a warrior and on her eighteenth-birthday she’ll become the alpha female of the next generation of Guardian wolves. But Calla’s predestined path veers off course the moment she saves the life of a wayward hiker, a boy her own age. This human boy’s secret will turn the young pack's world upside down and forever alter the outcome of the centuries-old Witches' War that surrounds them all.

This is another debut YA paranormal that's been getting TONS of great buzz all over. Personally, I'm a vampire girl, but the synopsis reminds me of Blood and Chocolate by Annette Curtis Klause, which I love a lot, and it sounds like there will be BLOOD AND GUTS. COOL. *is in bloodthirsty mode, as per WIP's requirements* I'm envious of each and every person who's been able to read this already, and would probably go to great (unharmful) lengths to read this.

This is another colourful, action-packed Victorian detective novel about the exploits of agent Mary Quinn. At a young age, Mary Quinn is rescued from the gallows and taken to Miss Scrimshaw's Academy for Girls. The school turns out to be a front for a private detective agency. At age 17, Mary takes on her first case (A Spy in the House). In this, the second book of the series, Mary Quinn sets out to uncover the truth behind a suspicious death at St. Stephen's Tower, better known as the clock tower of the Houses of Parliament. The accident occurred after hours in a highly public part of town and despite the presence of night watchmen. Mary, disguised as Mark Quinn, becomes a builder's assistant to find out the truth about the body at the tower.

I thought Ying's first book, A Spy in the House, was excellent (see my review here), and I can't wait to read the next in the series. Unfortunately, I can't do any raving here without giving out spoilers (the solution to this is obviously for you all to read this so I can talk about this without giving key points away), but yep, I'm super-excited. And the care that Candlewick put into making these covers appealing and accurate to the story is astounding, something that all publishers should take note of and do. 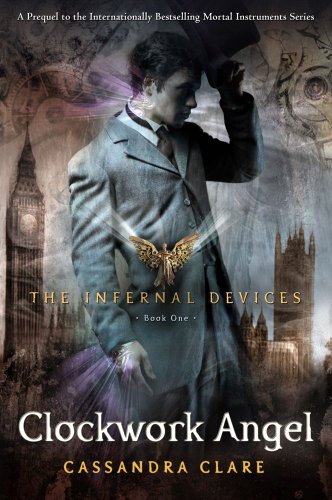 When sixteen-year-old Tessa Gray crosses the ocean to find her brother, her destination is England, the time is the reign of Queen Victoria, and something terrifying is waiting for her in London's Downworld, where vampires, warlocks and other supernatural folk stalk the gaslit streets. Only the Shadowhunters, warriors dedicated to ridding the world of demons, keep order amidst the chaos.

Kidnapped by the mysterious Dark Sisters, members of a secret organization called The Pandemonium Club, Tessa soon learns that she herself is a Downworlder with a rare ability: the power to transform, at will, into another person. What's more, the Magister, the shadowy figure who runs the Club, will stop at nothing to claim Tessa's power for his own.

Friendless and hunted, Tessa takes refuge with the Shadowhunters of the London Institute, who swear to find her brother if she will use her power to help them. She soon finds herself fascinated by—and torn between—two best friends: Jem, whose fragile beauty hides a deadly secret, and blue-eyed Will, whose caustic wit and volatile moods keep everyone in his life at arm's length...everyone, that is, but Tessa. As their search draws them deep into the heart of an arcane plot that threatens to destroy the Shadowhunters, Tessa realizes that she may need to choose between saving her brother and helping her new friends save the world...and that love may be the most dangerous magic of all.

In the novel, a 17-year-old girl, who has waited her entire life to be told by a group known as “the Society” who her soul mate is, has her world upended when she discovers she’s in love with someone other than the group’s pick.

I did tell you this was going to be the big-name WoW, didn't I? I'm really hoping this one is as good as its multi-digit book deal and early reviews indicate. Plus, the cover is genius: simple but memorable and cool. 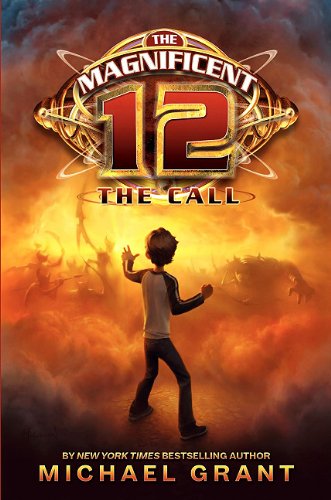 I'm not sure if that's the final cover, and I haven't been able to find an official synopsis yet, but Publishers Weekly described it as a "humorous fantasy series" in their BEA Kids' Galleys to Grab article. Plus, it's by Michael Grant, whose Gone series I really enjoy and make for unputdownable vacation reads. I think this one's middle grade, too. As far as adventure goes, if the Gone series is any indication, I think this one will be really good!

Oy, I'm EXHAUSTED and I don't know why, so I'm going to stop here for now. There are definitely a few more at BEA I'm hoping to find, especially Lauren Oliver's Delirium. You can check out the Kids' Galleys to Grab article and see if any of them are on your wishlist. Hope to see some of you in NYC next week!

Also, I'm sorry if I don't make much sense in this post. I'm trying to reread what I wrote and I can't even focus on what I just wrote. Someone get these stitches out of my mouth and put real food in me, quick!
Posted by Steph Su at 1:29 PM