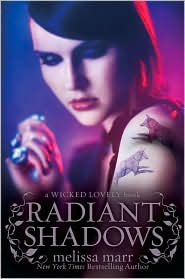 Devlin is the brother and assassin to the High Court faerie queen, Sorcha. Ani, a half-human, half-faerie under the protection of the Dark Court, knows that there is something very different about herself. When the two meet, they share a love and connection that they never knew they were capable of—a love and devotion that will bring about betrayal, danger, and the treacherous unbalance of all of Faerie…

I have had mixed feelings about the Wicked Lovely series, as I often find them too slow and overwritten to be truly enjoyable. In RADIANT SHADOWS, however, tensions sizzle, stakes are raised higher, and, even though there were still a few weak points, it did capture my attention in a way this series hasn’t since the first book, WICKED LOVELY.

Ani and Devlin are a fantastic pairing, each with their own worlds of problems and worries, but with an undeniable chemistry together. While I was slightly discomfited by how quickly they got together, their personalities—Ani a restless half-Hound, and Devlin having repressed strong emotions for millennia—justify and accentuate the turbulent urgency of their relationship. The two of them also drew out most of the other main characters in this series: tensions mount for everyone as Bananach, the faerie of War, gets the strength to act out her plans for chaos, and we begin to see the characters’ vulnerabilities, what truly matters to each of them.

Unfortunately—at least to me—like all the other books in the series, RADIANT SHADOWS is often slow and overwritten. We spend so much time in each character’s head, the third-person narration switching POVs almost every chapter, that much of the actual pages in the book are spent with us being forced to read about the same internal conflict that a character experiences, over and over again. Marr has the unfortunate tendency to overwrite, meaning that many of the mini-epiphanies the characters come to every other page or so, we could have easily inferred for ourselves, just from the dialogue, or the characters’ body movements. This tendency to force obvious thought processes on readers distracted me greatly and removed me from the dark immediacy of the novel’s many conflicts.

I’m uncertain as to how fans of this series will feel about it. Readers (like me) who crave higher stakes (which were not really apparent in the previous book, FRAGILE ETERNITY) will find it in this penultimate volume. On the other hand, if you’re reading this series with the hopes that Aislinn and Keenan will finally, finally come back into the story, you will be disappointed. Instead, you should appreciate the strong new characters introduced in this novel and the way the stage is set for a showdown that will hopefully blow the lids off of all other showdowns in the next and final volume in this beautiful faerie series.


Cover discussion: 4 out of 5 - I love all of the covers for this series. In this one, the pose and the blacklight party-esque lighting together look fantastic.

Review copy provided by publicity company/publicist.
Posted by Steph Su at 10:30 AM