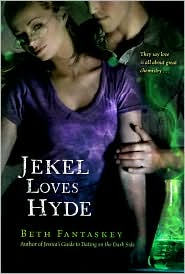 After her father’s murder, good-girl Jill Jekel fears for her academic future when she discovers that her father had drained all her college savings. She opens the forbidden box in his office with the hopes that whatever’s inside might help her win a prestigious chemistry scholarship.

It turns out that the box contains chemistry formulas that seem to link Jill’s family to the old Robert Louis Stevenson novel of Dr. Jekyll and Mr. Hyde. To unravel the formulas and win the scholarship, Jill pairs up with Tristen Hyde, a brooding British transfer student whose family has lived with a dark secret for a while. Shocking discoveries about the families’ connection and an unlikely romance abound, but Jill and Tristen must unravel their families’ mysteries before they are destroyed…from the inside out.

JEKEL LOVES HYDE has a fascinating premise, but Beth Fantaskey’s sophomore novel unfortunately doesn’t live up to her debut, the compelling, funny, and smoldering Jessica’s Guide to Dating on the Dark Side. The pace is slow, the writing stilted, and the characters lack believability and, well, chemistry.

Jill and Tristen’s romance will appeal best to fans of those often inexplicable paranormal matchups in the style of Twilight and Shiver. Jill is a timid character whose passivity and inability to get anything done get extremely frustrating extremely fast. I suppose the point of the book is to illustrate how her love for Tristen and the formula they create from her father’s papers change Jill, bring out the “bad” side of her (the side that we all have)—but when the change came about, it happened so abruptly, with such an uneven buildup beforehand, that I couldn’t really believe it actually happened.

Tristen’s character was more attractively complex: Fantaskey does a good job of illustrating his conflict of familial demands vs. individual agency. However, his thought processes and dialogue were quite obviously conceived of and executed by a female. The lack of distinction between Tristen’s and Jill’s voices, coupled with their alternating narrative POVs throughout the book, made for an almost uncomfortable read, in that the characters never stood out and achieved credibility.

JEKEL LOVES HYDE takes an intriguing look at the complex influences of family over individual agency, but that interesting concept was for the most part sadly mired in the mundanities of a less-than-fully-realized high school adolescent setting. The teachers and classmates were stock characters, and the chemistry experiments that Jill and Tristen performed lacked a richness of detail that would make us believe they are actually doing what the words on the page vaguely tell us they’re doing. Similarly, Jill’s interest in art and Tristen’s passion for music were characteristics that never fully coalesced with their characters for me.

There is no denying that JEKEL LOVES HYDE is an ambitious book. Fantaskey’s writing “tics” of flat supporting characters, love-conquers-all theme, and colloquial diction are once again prevalent here, but unlike in Jessica’s Guide to Dating on the Dark Side, there is no gratifying humor or steamy romance to excuse its weaker points. JEKEL LOVES HYDE will appeal most to readers who like their paranormal romances swoony and won’t mind a slow and perhaps not quite cohesive plot. Despite the lukewarm effect this book had on me, however, I still admire Fantaskey for coming up with the most original and compelling premises ever, and will not hesitate to pick up her future books.


Cover discussion: 4 out of 5 - Beth always gets the most wonderfully "broody" covers. They're different and beautiful and definitely movie poster-esque.

ARC received from author.
Posted by Steph Su at 7:45 PM

Email ThisBlogThis!Share to TwitterShare to FacebookShare to Pinterest
Labels: 3, beth fantaskey, review, YA