Review: Other Words for Love by Lorraine Zago Rosenthal 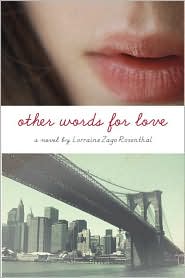 Ari’s life seems to consist of being a dutiful, perfect younger sister to Evelyn, who got pregnant and dropped out of high school to start her family, and listening to her stunning best friend Summer’s various adventures. Ari longs for the kind of intimate love that Evelyn and her husband Patrick share, a love that does not seem to consist of living up to expectations, as her relationship with her mother is.

When Ari gets the chance to enroll at the same private school that Summer attends, she befriends Leigh, and through Leigh gets to know Blake, whose attention to her seems too good to be true. As Ari and Blake’s relationship progresses further, however, it feels to her like everyone is trying to tear them apart, to talk down the seriousness of their relationship. Is what Ari has with Blake the real thing, or is it just another manifestation of her desire to be loved?

OTHER WORDS FOR LOVE, Lorraine Zago Rosenthal’s debut novel, is not what I expected. The jacket synopsis leads one to believe that this is a classic love story, when it is more a story about family and multiples types of love. Even with this grateful expansion of the book’s contents, however, it failed to truly impress me.

Ari’s story deserves to be read because Ari is so relatable. She is very much the everygirl: smart, dutiful, feels overlooked, feels plain next to her vibrant friends, wants to be loved just as she is. Rosenthal constructs Ari’s story in such a way as to make us feel for Ari and all her struggles, despite the fact that her desires may in fact be inherently selfish. For Ari is not perfect. She believes that romantic love can fix all her problems and chooses to obsess over her lack of it instead of focusing her attentions elsewhere more productively. This focus on attaining romantic love is not something we really like to admit to, but we’ve all done it some time or another. Perhaps we may like Ari because we recognize her flaws and yet recognize ourselves in her.

However, this book didn’t quite succeed in aweing me with its attempt at covering so many human concerns. OTHER WORDS FOR LOVE feels like it’s written from an adult hindsight perspective, which for me at least results in an emotional disconnect with the characters. I don’t really read a book to have characters tell me what is wrong with their beliefs and actions; I like to figure that out myself.

Furthermore, I felt like the book tried to focus on so many huge topics that nothing felt truly complete. My favorite subplot involved Ari’s relationship with her sister’s family. Even that, however, felt inconsistent, with a hopeful ending that felt rushed. Ari’s friendships with Summer and Leigh fell flat, like textbook portrayals of “the glamorous friend and her plain sidekick” and “the self-involved main character’s poor treatment of her new friend,” without any true weight behind either of them. And I felt so little attraction between Blake and Ari that (that emotional disconnect I mentioned earlier) that I couldn’t fully let myself believe that it was as transformative a relationship as Ari believed it was for herself.

Ultimately, it was simply a mismatch of literary priorities between this book and me. I can see appreciators of detailed, analytical biopics on high school girls’ lives such as what you find in Curtis Sittenfeld’s Prep enjoying this book. Unfortunately, it just wasn’t the book for me.


Cover discussion: 3 out of 5 - It never really pulled me in, and it was only after I had read others' good reviews of the book that I became interested in it. It just lacks a certain sort of... brilliance that attracts me to covers, I suppose.

Review copy received from publisher. Thank you, Random House!
Posted by Steph Su at 10:00 AM