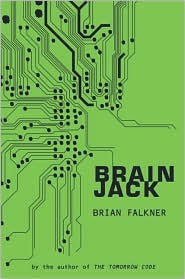 In the future United States, a savvy teen hacker named Sam breaks into the nation’s largest telecommunications office system to order himself a top-of-the-line neuro-headset and inadvertently causes a several-day meltdown of the US’s network. Because of this, Sam is courted by a top government computer security organization to put his skills to good use. However, Sam and his coworkers do not anticipate a new threat that awaits them. As the world turns from traditional keyboard-and-mouse technology to the faster hands-free neuro-headset, the power of society’s collective conscience may prove to be the most dangerous weapon ever accidentally created.

BRAIN JACK is an edge-of-your-seat cyberthriller stuffed full of technical jargon. It will definitely not appeal to everyone, particularly those who like their characters more developed and the storytelling tighter, but if you’re interested in an absorbing, probably-too-smart-for-its-own-good thriller, then this is an interesting choice.

I of course like well-developed characters, but I can make exceptions when the author can convince me that he knows what he’s talking about with the premise—even if he doesn’t. And Brian Falkner convinced me. I don’t consider myself particularly technologically savvy, especially for the mechanics of computer hardware and the Internet, but I found myself enjoying the characters’ unending technical term-dropping. It sucked me right into a cyber-world that I knew very little about, and so I was sufficiently impressed by the terminology used to get into the story.

Where BRAIN JACK started unraveling for me was upon the introduction of the book’s main nemesis. I won’t spoil it for interested readers, but the idea is conceivable if we stretch our imaginations a bit. However, the book then resorts to wince-inducing action-adventure elements to force the plot along. These include: a getaway vehicle, a remote hideaway, and the obligatory car-and-gun chase, among others. It turns out that I was more satisfied with the world-building than with the actual plot of this book.

In terms of quality, there are better books out there, but if you’re looking into trying out a cyberthriller and are okay with the other flaws that I’ve mentioned, then this will make for one hell of a ride.


Cover discussion: 3.5 out of 5 - Very cool, very cool. And the finished copy is this shimmery green color.

Review copy sent by publisher; read for Cybils. Thanks, Random House!
Posted by Steph Su at 10:58 AM

Email ThisBlogThis!Share to TwitterShare to FacebookShare to Pinterest
Labels: 3.5, brian falkner, review, YA