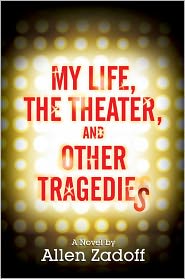 My Life, the Theater, and Other Tragedies by Allen Zadoff

Life can’t be lived behind the scenes.

High school sophomore Adam Zeigler thought the best way to live life was behind the spotlight. When his father died two years ago, Adam retreated into the world of the theater, ultimately winning a coveted place on the theater crew and finding (what he thought) was his place in the world, high above the theater floor in the lighting grid.

But then a young actress, Summer, appeared in his view. Instantly smitten, Adam is determined to win her over. But to do so, he'll have to defy his best friend and break the golden rule of his school: techies and actors don't mix.

Set against the backdrop of a high school production of A Midsummer Night's Dream, MY LIFE, THE THEATER is a theater story, a love story, and a bromance in one. The complexities of life, death, and high school are revealed as Adam struggles to find the courage to step out of the shadows and into the light. [summary from Goodreads]

I very much enjoyed Allen's first YA book, Food, Girls, and Other Things I Can't Have, and have been looking forward to his future books ever since. If this contains his usual amount of humor and heart, then it is sure to be a delightful read.

My Life, the Theater, and Other Tragedies will be published in hardcover by EgmontUSA on May 10, 2011.
Posted by Steph Su at 9:00 AM