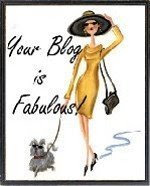 Laura of Laura's Review Bookshelf and Taylor of For the Love of Books both nominated me to receive the "I'm Fabulous!" blogger award. And for that I can only say: THANK YOU! It's my first award, and it means a lot to me. :)
Rules:
List five things you are obsessed with/addicted to and then nominate five other fabulous blogs to pass on this award on to!
Oh, brother. This is going to be a difficult list to make...!
My Obsessions/Addictions:
1. Bargain gently used books or discounted new books. I admit, if I bought all of the books that I have at full price I'd be living in a cardboard box right now. And so I am indebted to used bookstores (especially the Book Barn near my house: $1 trade paperbacks and $2 hardcovers--nearly new condition!), online book-swapping sites such as PaperbackSwap and BookMooch which help satisfy the book-buying affliction of mine.
2. LibraryThing. It's. So. Much. Fun. I admit, I'm a little obsessed with it, and will spend hours and hours (re)organizing my library there, as well as looking at and answering forums and finding cool people there! (Speaking of cool people, you really CAN find a lot of us YA bloggers there. Lenore, for just one example. And Carol(ina)'s there too. [I'm stephxsu there, by the way, you should leave me a message! hehe])
3. Organizing. My boyfriend loves me. My parents love me. My brothers think I'm insane. My obsession with organizing used to be worse. Back in high school I'd totally change the layout of my bedroom at least once a season. Ridiculous, eh? It's a lot harder to do that now so I organize the best way I can: by vacuuming, Swiffering, and constantly reshuffling my stacks and shelves of books!

4. Gilmore Girls. This is perhaps the least debilitating of all my addictions. I own Seasons 1-6 in DVD (thank you, brothers, for getting them for me as a Christmas present!) and, two years later, am still only halfway through Season 2. (Yes, I am a terrible GG fan, I admit it!) But I simply love the dialogue and the characters of that show. I was never that much of a fan of Alexis Bledel's acting, but Lauren Graham...WOW! Her character of Lorelei is who I aspire to be like in terms of sense of humor and outlook on life.
5. Food. It's especially bad during the swimming season, when I just need to consume thousands of calories (especially carbs) per day. And yet I'm still hungry. So in addition to madly craving carbs during the season, I also have a permanent sweet tooth. I'm a big fan of chocolate. And baking. And baking things that contain chocolate as an ingredient. Yummmmm. If bloggers ever get together for a potluck party you can be sure I'll bring some baked goods.
The 5 fabulous bloggers I nominate for the award (with an emphasis on those new blogs who haven't gotten it yet):
1. Jenny aka ProphecyGirl at Wondrous Reads - simply one of the nicest people ever, with good reviews for books that I always look at, plus a really cool US vs. UK covers feature.
2. Donna of LitBites - she's only been blogging for a little while and is still rather unknown but I just love the way she writes her reviews; she's one worth checking out!
3. Aerin at In Search of Giants - In addition to having a great layout, she is also unabashedly a book fanatic and won't hesitate to make her obsessions about certain books (her desire to obtain a copy of The Forest of Hands and Teeth) known in the hopes that she might get copies of them. And that is something that I can only admire. Plus, she's open to the possibility of swapping books with me! Yay!
4. Deltay at Lucid Conspiracy - friendly and intelligent. :)
5. Thao at Serene Hours - I have to send her my love, international mail, and really really hope she eventually wins one of my contests, hehe.
Honorable mentions to Lenore, Carol(ina), and Alea, because they are some of the nicest people I have met here and because they have probably already been nominated numerous times over.
Yay, that was fun!
Posted by Steph Su at 11:27 AM