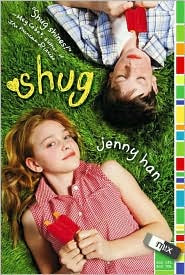 Twelve-year-old Annemarie Wilcox—nicknamed “Shug,” which is short for sugar—is feeling anything but sweet right now. She’s entering middle school, her parents are constantly fighting (when they’re not drunk or away for work), and things are changing between her and her friends. Mairi, Hadley, and even her best friend Elaine, a Korean American from up north, are eagerly venturing into the world of becoming a woman and meeting boys. But Annemarie wants nothing to do with that world…not unless it includes Mark Findley, her childhood best friend and the guy she recently realizes she’s in love with.
Trouble is, Mark doesn’t seem to reciprocate her feelings. In fact, Annemarie feels like she hardly sees him anymore, so busy is he with hanging out with other people. Instead, she’s spending a lot of time tutoring Jack Connelly, which is too bad because they’re sworn enemies and hate each other’s guts. Annemarie doesn’t want to grow up just yet, but she has to learn the hard way (like we all do) that it’s a painful and necessary, sometimes heartbreaking, process with light at the end of the tunnel.
I love Judy Blume-esque books that focus on that painfully awkward and difficult transition right before puberty; thus, I LOVED Shug. This is a story that’s full of characters that you’ll want to be friends with. Annemarie in particular is a spunky heroine, unafraid to say her mind, the girl we all remember being and the girl we wish we were at that age. The supporting characters, too, are not caricatures but rather boys and girls (and men and women) with their own problems. I’m especially a fan of Jack right from the start; the dynamics between Annemarie and Jack are great.
If you want a growing-up novel that’s more Southern than Judy Blume’s and less sex-oriented than Phyllis Reynolds Naylor’s Alice series, pick up SHUG. You won’t regret it. 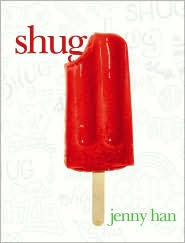 I'm also posting the hardcover version here. Personally I'm so glad they changed the cover during the paperback reprint. The hardcover didn't really attract me at first, which could be why it took me so long to finally pick this book up. Which one do you like more?
Posted by Steph Su at 11:05 AM