Bonnie Doerr is the debut author of Island Sting (Leap Books / Jan. 6, 2010), a Lord of the Flies-esque ecoadventure tale set in the Florida Keys. This was supposed to be part of a Traveling to Teens tour, but due to some miscommunication and mishandling I was not able to receive a copy of Island Sting to review in time for this post. Instead, I will give you a guest post from Bonnie! Since I had done my 2009 book lists just a few weeks ago, I asked Bonnie to talk about the best books she read in 2009. Welcome, Bonnie, to Steph Su Reads!

It’s really tough to pick out favorites from the many books I read in 2009, and the ones I’ll mention are freshest in my mind because I read them most recently. But I'm always happy to tell readers about good reads!

Something about Annie and Miss Eliza stayed with me for weeks after I finished Road to Tater Hill by Edith Hemingway. The relationship between the young girl and older woman was tentative and tender. Both were suffering loss in unique ways, and their growing friendship was a lovely story of finding support and encouragement in unexpected forms and relationships. I related to Annie’s need for solitary exploration in the mountains of North Carolina (I live in NC and spent my childhood roaming mountain county), admired her standing up for an old lady with no friends, and heard the music and poetry in its pages. What reader doesn’t adore a shared love of the written word and the pleasure it can bring to those who have so little. Annie makes that happen for Miss Eliza, and I loved her for it.

Shooting the Moon by Frances O’Roark Dowell was an unexpected treat. I would never have read the book had I known it dealt with an ugly period in my life--the Vietnam War. But I couldn’t put it down. When I’d finished it, I decided it was a must-read as the most honest, yet safe and anti-inflammatory, treatment of the subject imaginable. Jamie, the twelve-year-old daughter of a die-hard Colonel, is all about soldiering and performing one’s duty. She even wishes she could go to war. Her understanding of the true nature of war and the Vietnam conflict comes slowly and naturally through her relationship with her brother, JT. After JT is shipped to Vietnam, he sends Jamie rolls of film to develop. As the photos of the reality of war change, so does Jamie’s gung-ho attitude.

I’m a sucker for reading about outdoor adventures and, though Wild Things by Clay Carmichael was not exactly that, it contained every element of a story that grabs me. First of all, the main character’s name is Zoe. I once had a dear little scruffy dog named Zoe. I know that has nothing to do with the book, but still… In the story Zoe doesn’t trust anyone. (Actually, neither did my dog. It had been a stray left beside the road. So that explains the connection!) Zoe is taken in by her eccentric uncle Henry, former surgeon, now grand-scale metal sculptor. So there’s one of my favorite elements --art. Zoe meets several other peculiar characters (I love quirky folks) old and young, slightly tames a cat (I'm nuts about pets) that is as untrusting as she is, and a most mysterious boy in the woods (what girl can resist a mysterious boy in the woods?). I loved being inside C’mere the cat’s head as much as I enjoyed being inside Zoe’s. And I enjoyed every minute of exploring the woods and the cabin with its secrets. 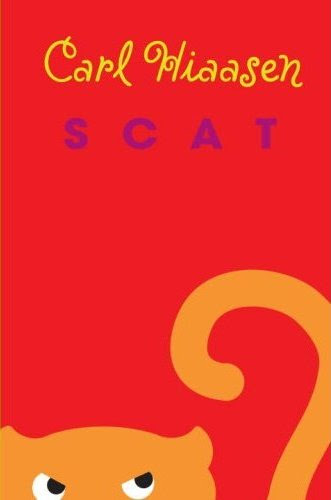 The most recent book I read, Carl Hiassen’s Scat, happens to be my favorite. I’ve read everything Carl’s written for adults and kids. I call him Carl because I’m so familiar with his work, and I wish I could have a roaring good time with him in person. Since that’s not likely, I pretend he’s my friend. Don’t you do that with authors whose books you love? The first time I saw Carl speak, I said to myself, “I want to write books for kids that deal with the fragile Florida Keys. I want to do for young readers what he’s done for adults--entertain and rant about the creeps that mess up our world.” Well, he beat me to it. I can in no way compete with his wit and talent, but he still inspires me. Scat is my favorite YA book of his so far. Pay attention to these points and see if you wouldn’t grin and be intrigued:
See what I mean? Now that’s a hook! Characters’ names alone are worth the read: Mrs. Starch, Smoke, Drake, Duane Scrod. Throw the story setup together with the characters, toss in an endangered Florida panther or two, a crook who’s drilling for oil in the protected Everglades, a stealthy eco-avenger, and students, Nick and Marta, who vow to discover the truth, and you have a book that was written just for me. I’m sure of it.

Thank you, Bonnie, for sharing your favorite reads of 2009 with us! I'll leave you with a synopsis for Island Sting (and hopefully in the future I can give you a review of it). Tell me the sound of it doesn't sound exciting:


When city girl Kenzie Ryan moves to a Florida wildlife refuge, she plunges straight into an eco-mystery. Kenzie trades New York streets for Keys pollution cleanup, and now, instead of hailing cabs, she’s tracking down a poacher of endangered Key deer.


Her new home does have some benefits—mainly Angelo, an island native, who teams up with her to nab the culprit.


But will they both survive when the killer turns from stalking deer to hunting humans?
Posted by Steph Su at 11:45 AM