Friday Featured Blogger (21): Meg/Choco from In Which a Girl Reads!

Like many of us, Meg (better known as Choco in the blogging world) is a teen blogger and aspiring writer. The difference between her and most others I know of is that she's got some serious writerly talent. Her blog posts about important and controversial issues in YA lit, the blogging experience, and more at In Which a Girl Reads are always insightful, hilarious, and oh so thought-provoking. Did you catch her thorough post on Why YA Romance Needs to Change? I can't believe she's only 16! Anyway, I managed to flag her down and ask her a few questions. You can totally get a sense of her distinctive writing style and personality in her answers. Welcome, Meg/Choco, to Steph Su Reads! 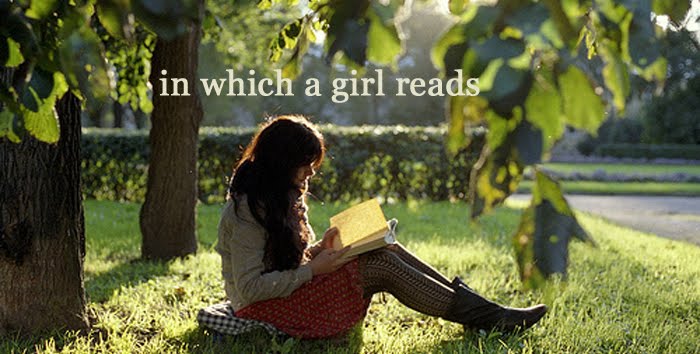 1. Tell us about yourself in a few short sentences.

I go by choco on my blog and I hail from a really boring part of suburbia. By day, I attend a menacing high school where the cafeteria doesn’t sell chocolate. By night I read and mostly fall asleep before I can get anything accomplished. I like to write too, and I hammer away at the piano when I get a chance. Procrastination is my most time-consuming hobby. I have two dogs that have an unfortunate habit of sitting on my clothes.

2. Tell us about your blog. When did you start it and why? What interesting things can visitors expect?

My blog is In Which a Girl Reads, which I started in late August 2009. At first it was a never-updated writer’s blog since I’d come across a blog-happy writing community, but I cleaned it up in October 2009 and decided to focus on reviewing books.

Visitors can expect lots of discussion posts since I really enjoy posting those and encountering so many different opinions. I’ve also started a teen writer interview series that will hopefully become a more frequent feature and I host a meme called Captivating Thursday where I post beautiful things: poetry, quotes, videos, music, and photos. If you stick around long enough, you might even spot a book review!

3. Complete the following sentece: Inspiration is...

something you have to actively chase after.

Sure, there are those brief moments of pseudo-inspiration that happen at the least likely moments. But I think true inspiration that keeps you going for a long time is something that’s worked at, not bestowed on you by a muse.

4. You are an aspiring writer. Tell us a little about that. For example: How long have you been writing? What inspired you to start writing? What are some authors that have influenced your writing style? How has your writing changed over time?

I’ve been writing since elementary school, got more serious about it in middle school, and it’s only in the last year or two that I’ve been dedicating a large chunk of time to it.

It’s definitely my love of reading that inspired me to write. I started writing my first novel at twelve because I just wanted to churn out something I’d love to read. The resulting disaster of a novel was complete three years later.

Since then I’ve changed a lot in terms of style and interest, mostly because I began to truly appreciate words in the books I’m reading. I hadn’t realized before how beautiful writing can be.

I’m not really sure who influences me the most, but I do have a lot of favorite authors. I’m in love with the breathtaking prose of Vladimir Nabokov, Arundhati Roy, Markus Zusak, F. Scott Fitzgerald, and Cormac McCarthy. Also, I love poetry by Margaret Atwood and Carol Ann Duffy since they’re both geniuses.

In terms of children’s fantasy: Diana Wynne Jones, Roald Dahl, and J.K. Rowling are my favorites. And I recently discovered Melina Marchetta, Sherman Alexie, and Courtney Summers on the YA side of things and they’re fabulous. I practically worship all of those authors and so many others—I either love books for their beautiful words or for their entertainment value.

I’ve got a lot to learn for writing. But I’m okay with that. I reckon it’ll take a few decades before I write anything that’s actually good. In the meanwhile I’ll read a lot more and practice a lot more.

5. That's a great attitude to have, and I love the variety of authors you just listed. Now, can you name 3 favorite books and why you think everyone should read them?

I really cheated in the previous question because I think everyone should read the books by the authors I mentioned, but if I had to just narrow it down to three—that’s really a tough one. I’ll go by genre then.

Middle grade: Charmed Life by Diana Wynne Jones
This is my absolute favorite by Diana Wynne Jones. I can’t say how many times I’ve read it, but I’ve been obsessed with this novel for many years. I really think it’s the perfect embodiment of a children’s fantasy novel—I adore the characters: confused Cat, cruel Gwendolyn, and the magnificent Chrestomanci who walks around in dressing gowns and with a vague expression on his face at all times. This book is just such good fun: magical mishaps abound and the characters live in a castle. The writing style and voice are just perfect as well. I can’t even express my love for this book coherently.

YA: The Book Thief by Markus Zusak
I think this is one of the most beautiful novels I’ve ever read. The prose is gorgeous and astounding and every page holds something unexpected. The characters are endearing, the descriptions of them mesmerizing: “lemon-haired” Rudy, Papa’s silver eyes that “rust”, Max’s eyes “like swamps.” And then there’s Death as the narrator who sees colors everywhere, and Leisel, who has a dangerous obsession with words. The Book Thief is set during World War II and this story is just one that needs to be read—by everyone. I couldn’t recommend this book more.

Literature: The God of Small Things by Adrundhati Roy
I don’t know if I love the nonlinear plot or the fragmented sentences more. Roy creates a novel full of vibrant images, powerful characters, and amazing figurative language. The social criticism of the Indian caste system is also very powerful. Roy’s prose is beautiful and every sentence has something original and heart-stopping about it. It’s the sort of book that’s immensely quotable as well. I love it with all my heart.

6. Wow, I love all your choices and agree with you on them. So if you could travel to any point in time, where would you go and why?

At first I thought of Ancient Greece, mostly because I adore Greek myths. And then I thought medieval England because I love King Arthur, or Renaissance Italy for the art. But myths are a lot different from the real life. I don’t think the plague in medieval/ Renaissance times would be much fun either. *shudder*

So I’ll go with 18th century England instead, preferably the Georgian period. The outrageous wigs! The dresses! The (no doubt) horrible hygiene! But I can’t help thinking it’s a monumental time where political thought and change are brewing and the American colonies are rebelling. And ooh, romanticism. So yes, last half of 18th century England it is.

7. A YA short story anthology called Zombies vs. Unicorns will be published later this year. Are you Team Zombie or Team Unicorn?

Unless the unicorns are of the Diana-Preterfreund variety (i.e. vicious monsters) I’ll have to go with zombies. They eat brains and they’re scary. And it’s best to be on their side in preparation for the zombie apocalypse. Yes, yes, I’m already making preparations for that day. *strategizes*

8. What are some of the best things you've learned since you started blogging?

I’ve learned so much about writing book reviews and getting my opinions out there in a coherent way. I feel like I’m now able to take a stance on something and explain exactly why I think that way—and that’s definitely something I wouldn’t have the chance to learn otherwise.

I’ve also learned a lot about how to network, and I’ve met so many wonderful people in the process. Making friends on the interwebs isn’t something I was expecting, but it’s really the best part!

9. What are some things you just LOVE to receive for presents? :)

I love to get books, of course. And I wouldn’t say no to basketfuls of chocolate or fresh-baked cookies, either. :)

10. Count me in for the baked goods. Finally, tell us 2 interesting things about yourself that can spark conversation.

1) I literally have eight alarm clocks blaring in the morning. And THEY DON’T WORK! When I’m asleep, I might as well be dead (if you saw me in the morning you’d think I’m a zombie-cavewoman hybrid). I sleep through all my alarms and it’s a terrible.

2) It’s my goal in life to buy a castle. I’m not exactly sure how I’ll do this but it absolutely must have a moat and be pretty dilapidated. (I think I’ve read I Capture the Castle one too many times). I’d live in the tower and drink tea and read by the fireside. Now, that’s my dream life!

Hahaha, my brother does the alarm clock thing, too. Thanks so much for your fun answers, Choco! If you haven't discovered her blog yet, now is a good time to head over and do so, catch up on all the incredibly well-written posts she's written. Go!
Posted by Steph Su at 10:00 AM