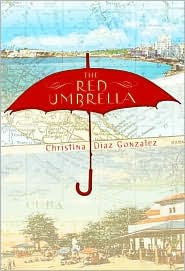 14-year-old Lucia Alvarez’s life is turned upside down when Fidel Castro takes power in Cuba in 1960. Suddenly her best friend is a propaganda-spewing stranger, soldiers brutally kill her father’s business acquaintances, and her parents are being closely watched. Lucia just wants to be an average teenage girl, hanging out with her friends, keeping up with the latest American fashions, and maybe even getting closer to her crush, but that can no longer be.

Then Lucia and her younger brother, Frankie, receive visas to go live with a temporary foster family in Nebraska. The culture shock is great and frightening; can Lucia manage a new language and culture, growing into a young lady in the meantime, when the fate of her parents and her beloved Cuba are so uncertain?

I have never read a novel like Christina Gonzalez’s debut, THE RED UMBRELLA. This is a necessary story about an aspect of Cuban American history that has not received enough attention in YA literature—and best of all, it’s extremely well written and engaging!

Gonzalez writes convincingly of all her characters. Lucia is partly your average teenager, desiring friendship, love, acceptance, and pretty things. Her parents are a believable blend of loving, strict, and worried, and Frankie is a cute and appropriately occasionally annoying younger brother. The way the story follows Lucia through this difficult time in her life, however, is a miraculous achievement: my heart ached as I read about the difficulties she faced, and I saw a distinct, yet subtle, growth in her as she realizes the extent to which Castro’s takeover would affect her life.

The pacing and plot were a little uneven, though, and thus not as fulfilling as it could’ve been. The first two-thirds of the book takes place within a few fast and furious months in Cuba, as the revolution starts taking over Cubans’ lives. This part of the book is great, as we see Lucia and her family struggling to remain true to themselves in the face of so much propaganda and pressure. However, when Lucia and Frankie spend time with the elderly white couple in Nebraska while they await news of their parents, time sees to stop and go in choppy bits, covering more than half a year in just a few dozen pages. As a result, I felt that Lucia’s adjustment to American life and subsequent maturation were rushed, and that the characters in this section of the book were underdeveloped.

Pacing aside, this was a fantastic read, great for everyone. The Alvarezes are a family to cheer for throughout the whole story. Never before have I seen this aspect of Cuban American history discussed in such an approachable and sympathetic manner. I am thankful for this book, hope others will strongly consider reading it when it comes out, and definitely look forward to anything Christina has next for us!


Cover discussion: 4 out of 5 - Unique, and amazing as a result. The complex piecing-together of the background, topped by a bright and simple symbol (the red umbrella) gives this a classic and important feel.


Want more? Check out my interview with Christina!
Posted by Steph Su at 6:00 PM