Adult urban fantasy turned YA writer Jackie Morse Kessler is participating in a Traveling to Teens tour to promote her debut YA novel, a unique and wonderful magical realism book called Hunger, which reimagines the Four Horsemen of the Apocalypse. Today, Jackie was kind enough to stop by and answer a few questions for readers. Welcome, Jackie, to Steph Su Reads!

1. A modern, urban fantasy retelling of the Four Horsemen of the Apocalypse--how cool! What gave you the idea for this new series?

Death, doom and destruction, of course! **g** Actually, for me the focus was always on an anorexic protagonist becoming Famine. Thinking through the purpose of the Horsemen of the Apocalypse came later. I guess it’s closer to magical realism than urban fantasy.

I’ve wanted to write this story for years. But I’d convinced myself that it would never sell, because it wasn’t sexy. No one would want to read about a girl with anorexia, I thought. Luckily, my agent convinced me otherwise. (Her exact words were, “Are you crazy?”)

2. Lisabeth's demonic inner voice is so pitch-perfect it's eerie. Did you have a similar inner voice when you were a teen? How did you finally defeat it?

Ah, the Thin Voice. Yeah, evil, isn’t it? I used to be bulimic, and even though I haven’t been for many years, it was very easy to slip into that mindset when I was writing HUNGER. I wonder if we ever lose that nasty voice, the one that whispers how ugly/fat/alone/insert-your-poison-here we are. I still have bad days when I feel worthless. But even at my worst, I still live my life. That’s the thing: being able to ignore that voice if we can’t completely silence it. I’ll never be perfect. And that’s OK.

3. How different was it to switch from writing adult urban fantasy to YA?

Once I figured out that the protagonist was 17 and not an adult, it just flowed. So I was very fortunate; it wasn’t difficult at all. (Maybe that’s because the story has been simmering for 10 years! It was much harder writing the second book, RAGE.)

4. Let's talk a little about Death, probably my favorite character. Why did you decide to create such an unconventional--and, as a result, endearing--Death character?

Thanks! He sort of pulled an Athena and sprung from my mind, fully formed. I wasn’t even into Nirvana when I created him. (Or maybe I was and I just didn’t know it.) Other authors have done wonderful things with the character of Death — Neil Gaiman, Terry Pratchett and Piers Anthony come immediately to mind; I’m sure those characters influenced me when I created Death for HUNGER.

Unlike the other Horsemen, who have been replaced over the years, Death is the original. So it seemed to me he had to have a very...interesting perspective on life. You’d have to have a sense of humor if you were Death for thousands upon thousands of years, no? (One hopes!)

5. The Four Horsemen are said to bring about the apocalypse as harbingers of the Last Judgment, in the biblical version. At the risk of sounding a bit morbid, how might you imagine the end of the world coming about?

Well, if I were an evil overlord—and if there’s an opening, please let me know—I’d destroy everything with chocolate. Chocolate typhoons. Chocolate avalanches. Chocolate volcanoes. Chocolate climate change! Sucks for those people who are allergic to chocolate, but hey — I’m evil. **g**

I’d be the Horseman of Second Guessing. My color would be blue—no, green...I’d have an overstuffed backpack as my symbol because I’d be afraid that I’d forgotten whatever my real symbol was. And I’d mostly hang out in Washington, D.C., where it seems like second-guessing prevents anything meaningful from getting done quickly. 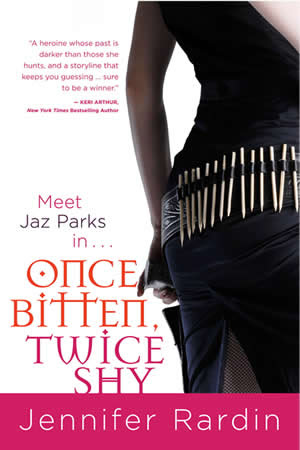 7. What books would you recommend to a reader who's interested in starting to read adult urban fantasy?

Thanks for answering my questions, Jackie! I encourage you to check out the tour as it continues tomorrow at Sarah's blog (http://sarahbear9789.blogspot.com). You can find the complete tour schedule at the Traveling to Teens website here, and Jackie's author website is here. I hope you check Hunger out!
Posted by Steph Su at 9:00 AM