Ethan Wate knew that his romance with powerful Caster girl Lena Duchannes was never going to be easy. But, in the wake of Lena’s uncle’s death, things seem almost impossibly difficult. Lena is pulling away from Ethan and hanging out with her Dark cousin, Ridley, and a mysterious boy who is but is not quite an Incubus. Even worse, old and new nemeses return, struggling to stake a claim on Lena and her Caster powers.

With the help of his best friend, a new Keeper in town, and an unexpected Caster ally, Ethan sets off on a journey through mortal and Caster worlds, chasing a Caster myth that may or may not hold the answer to Lena’s changes.

BEAUTIFUL DARKNESS is a worthy sequel to Kami Garcia and Margaret Stohl’s bestselling debut novel, Beautiful Creatures. Everything that fans loved in the first book appear here as well: the lush Southern atmosphere, comfortable teen speak, forces of good and evil battling, and a romance that triumphs over impossible obstacles.

BEAUTIFUL DARKNESS occurs on what could be considered a grander scale than Beautiful Creatures. Stakes are higher, adventures are more far-reaching. Events unfold at the same almost maddeningly leisurely pace as the first book, but past the first 150 pages, I found myself absorbed by the epicness of Ethan’s struggles. I loved that the plot takes you miles across Southeastern US and beyond that, in the Caster realm. The physical movement of the characters in BEAUTIFUL DARKNESS now matches the sprawling grandiosity of this series’ premise—something that BC fans will devour.

The second book reveals to us more of the core group of characters’ inner turmoils, from Ethan and Lena’s conflicting emotions and dedication towards one another, to Link and Ridley’s evolutions; introduces several compelling new characters; and adds mysterious depth to some already larger-than-life Gatlin residents. A more or less successful web of characters and their development set this series apart from most other paranormal romances.

The Caster Chronicles works, for me, on the most basic level of sweeping good vs. evil conflicts and romances that conquer all. It is, to be honest, not great writing. I find Ethan’s voice to be generally unconvincing, a boy lacking in truly attractive distinction. All too often the writing contains sentences that make points that the average reader will be able to infer for him- or herself: “duh” reactions to events or revelations. The magical element of this series is still a bit murky for me; I feel like it relies mostly on the characters’ insistence of its malevolence for its impact (or lack thereof). Critical revelations occur with insufficient forewarning, and I was left scratching my head and wrinkling my forehead sometimes in confusion and disbelief.

Those points being made, BEAUTIFUL DARKNESS and the first book have accomplished what the series set out to do: create a slightly different paranormal romance world that Twilight fans will greedily devour. If you’re not too hampered by a need for literary sophistication, then this is one of the most entertaining and epic paranormal series out there.


Cover discussion: 4 out of 5 - I love how nice it looks alongside the Beautiful Creatures cover. The stairs in the background allude to the Caster Tunnels that feature so prominently in this book.

This review was brought to you as part of the Beautiful Darkness blog tour organized by Novel Noise. Another tour stop occurs today at Raw INK Online, and the next blog stop on the tour is Monday, October 18 at GreenBeanTeenQueen. Happy book birthday, Beautiful Darkness! 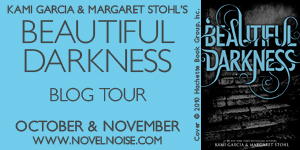