Today I have the lovely honor of being the second stop on the vlog tour for Becca Fitzpatrick's second book, Crescendo, the sequel to the bestselling Hush, Hush. Today she tells readers about how her process of researching angels went. Watch below!

Or you can watch the video on Youtube here.

Thanks, Becca, for sharing this with us! The next stop on the tour is October 8 at Chick Lit Teens. Alternatively, you can find the full tour schedule on Becca's Livejournal here. 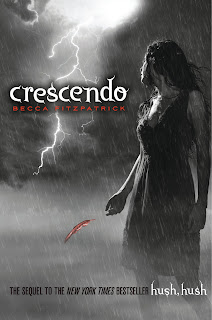 Here's a little bit about Crescendo:

Nora should have know her life was far from perfect. Despite starting a relationship with her guardian angel, Patch (who, title aside, can be described anything but angelic), and surviving an attempt on her life, things are not looking up. Patch is starting to pull away and Nora can't figure out if it's for her best interest or if his interest has shifted to her arch-enemy Marcie Millar. Not to mention that Nora is haunted by images of her father and she becomes obsessed with finding out what really happened to him that night he left for Portland and never came home.

The farther Nora delves into the mystery of her father's death, the more she comes to question if her Nephilim blood line has something to do with it as well as why she seems to be in danger more than the average girl. Since Patch isn't answering her questions and seems to be standing in her way, she has to start finding the answers on her own. Relying too heavily on the fact that she has a guardian angel puts Nora at risk again and again. But can she really count on Patch or is he hiding secrets darker than she can even imagine?

The sequel to the New York Times bestselling phenomenon Hush, Hush will be available October 19. 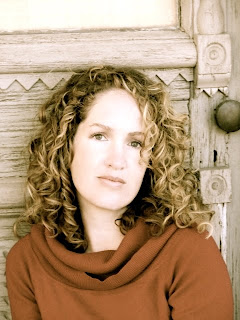 Becca Fitzpatrick's first book, Hush, Hush debuted as a New York Times bestseller. She graduated college with a degree in health, which she promptly abandoned for storytelling. When not writing, she's most likely running, prowling sale racks for shoes or watching crime dramas on TV. She lives in Colorado. Find out more at beccafitzpatrick.com.

Find out more about the books at the new book website, www.hushhushbooks.com.
Posted by Steph Su at 9:10 AM