Clare B. Dunkle is the author of the recently published Victorian gothic novel The House of Dead Maids, which I reviewed earlier today for a blog tour. I now give you an interview with this accomplished, intelligent, and well-spoken author! Welcome, Clare, to Steph Su Reads! 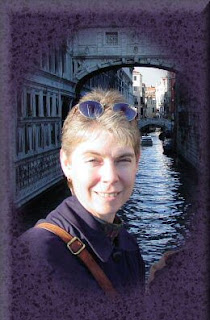 1. What inspired you to write THE HOUSE OF DEAD MAIDS, a sort of supernatural prequel to Wuthering Heights?

Several things fed into that inspiration. To start things off, I grew up with the book; it was very important to my mother, an English professor, and it became very important to me after I discovered it in her library at about the age of nine. Then, my beloved editor, Reka Simonsen, asked me at one point to consider writing a Brontë book because she thought it would be a good match to my style. And finally, my family went through a very dark time, not unlike the time the Brontës must have endured with their addicted brother Branwell. It was a good time for me to spend with ghosts.

I was inspired to make the prequel supernatural because to me Wuthering Heights has always seemed a thoroughly supernatural read. I can understand the motives but not the observations of those critics who downplay this aspect of the book. One of the book’s two narrators, Lockwood, encounters a ghost and calls it a ghost, although he also talks about having a nightmare. The other narrator, Nelly Dean, sees no ghosts herself, but she reports that four other characters have told her about their ghostly encounters. I wanted to give my Nelly Dean-style narrator the chance to see for herself what Nelly Dean only hears about.

2. Your writing is spot-on for Victorian literature. Who are some of your favorite Victorian writers?

Thank you so much! I worked very hard on that because I want readers to forget they’re reading a modern book when they read my prequel. I’m very fond of the Victorians; I enjoy Dickens, from the Pickwick Papers all the way through to his unfinished work, The Mystery of Edwin Drood (my favorite novel of his). Of course I love the Brontës, and I take time to reread the Sherlock Holmes stories every couple of years. (It’s one of my family’s favorite “sick in bed” books.) Lewis Carroll’s Alice stories have been important to me since childhood, and Bram Stoker’s Dracula took up the better part of a thrilling summer during my teenage years. Oscar Wilde’s “The Importance of Being Earnest” is one of the heirlooms passed down from my English professor mother; each member of my extended family can recite his or her favorite lines from that play. Through my research for this book, I got to know Sheridan Le Fanu, who produced some wonderfully atmospheric Gothic horror tales, and George MacDonald’s strange, lovely scenes still haunt my imagination.

3. THE HOUSE OF DEAD MAIDS is gothic, suspenseful, and ghost-ridden. Do you like to be scared? What are some of your favorite scary books and movies?

Bram Stoker comes to mind immediately: the original Dracula. I love the opportunity the protagonists of that novel have to sit down with an intelligent monster and chat about death. But by and large, I prefer ghost stories to horror novels or movies. It isn’t the scare factor that makes them special to me; I enjoy them for that glimpse of a hidden world with laws different from our own. As a child, I read every collection of ghost stories I could find, and I still read them avidly, but I spend little time with fictional accounts. Instead, I prefer “true” stories because even though they tend to be very short and have no real narrative to them, they are much more unpredictable and are therefore fascinating. “Real” ghost stories touch on folklore and superstition, both much loved studies of mine.

Some of my favorite ghost stories have been told to me: I ask about ghost stories when I visit historic properties, and I usually manage to ask new acquaintances for stories they’ve heard or ghostly encounters they’ve had. The oral tradition is still the best way to learn a new ghost story. Other favorites of mine are in collections like Glen Grant’s Obake Files. I read ghost stories wherever I can find them.

In the literary world, the scariest stories I know are by Robert Aickman. I have his work collected in two massive volumes by Tartarus Press. His surrealistic little tales cause such an atmosphere of dread that you’ll end up afraid of your own shadow after reading them. They produce a fever pitch of paranoia. On the other end of that spectrum is the gorgeous ghost story by Shirley Jackson called “The Lovely House.” It isn’t scary at all—but it is priceless.

I do enjoy a good scary movie. My favorite, for sheer atmosphere, is The Others, and I thought Paranormal Activity was well done. Also, since I enjoy “true” ghost stories, I like the Discovery series, A Haunting.

4. What other classic would you consider writing a prequel to?

I think one prequel is enough! It isn’t easy to hold the reader’s interest when he or she already knows the outcome. This book was a special case—a labor of love to persuade readers to try this wonderful classic.

5. If you weren't a librarian or a writer, what other careers would you consider?

As crazy as it sounds, I would very much enjoy abridging books and articles. A friend of mine edits a magazine, and as a favor to him, I abridged several articles down to a third or less of their original size. It was one of the most enjoyable puzzle games I’d ever played, trying to keep the spirit and style of the original while removing so much content. That would be a great way to earn a living.

6. What is one activity you'd like to try before you die?

I don’t know if it’s an activity exactly, but I lived in Germany for seven years, and I’d love to live for a few years in England and really get to know the place.

Thanks so much, Clare, for answering my questions! And now... 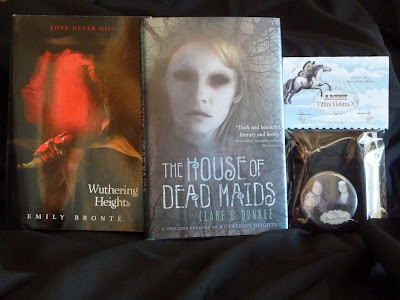 One Grand Prize winner will receive The House of Dead Maids, a gorgeous Brontë sisters pocket mirror, and the HarperTeen edition of Wuthering Heights! Two lucky runners-up will receive the two books.

To enter, send an email to DeadMaidsBook@gmail.com with your name, email address, and shipping address (if you're under 13, submit a parent's name and email address). One entry per person and prizes will only be shipped to US or Canadian addresses. Entries must be received by midnight (PDT) on October 31. Winners will be selected in a random drawing on November 1 and notified via email.

The next stop on Clare's blog tour is at Bronteblog. Check it out if you're interested!
Posted by Steph Su at 9:00 AM