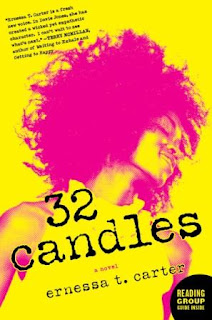 Growing up in small-town Mississippi with an abusive mother and classmates who make fun of her, midnight-skinned and wild-haired Davidia Jones makes her escape into Molly Ringwald films. Davidia dreams of her own Molly Ringwald Ending one day, in the form of the most popular boy in school and her crush, James Farrell of the Farrells of Farrell Fine Hair, sweeping her off her feet in front of the whole school. But after a particularly bad school joke, Davidia decides to head west, to LA, where she renames herself Davie and transforms into a sultry lounge singer.

However, Davie’s past catches up with her in LA when, 16 years after high school, she crosses paths with James Farrell again. A lot has happened in the meantime. Will Davie’s history prevent her from ever getting her happy ending?

I have been hearing unequivocal love for this book for, oh, about two years or so before I finally had the opportunity to participate in a blog tour for 32 CANDLES. First stop: dive into the book that a small but important contingent of the blogging population has been raving about ever since its publication. And I wasn’t disappointed. I so wasn’t disappointed, in fact, that 32 CANDLES is easily one of my favorite books of 2011 so far, and one of the most adorable books I have ever read.

The star of the show is Davie Jones. Neurotic without going overboard, self-reflective without it getting in the way of pure entertainment, and unapologetically weird, Davie stands out from the slew of debilitatingly neurotic female protagonists that usually feature in romantic comedies. Davie is like a black Bridget Jones without the weight obsession, which, let’s admit it, got frustrating real quickly. Davie’s weight obsession equivalent is her endless fascination with James, which in her high school stage was admittedly a bit scary. But somehow Ernessa Carter, through the voice of Davie Jones, makes everything okay. We don’t judge Davie for her neuroses; we love her all the more for them.

No romantic comedy is complete without a swoon-worthy romantic interest, and James has got the role down pat. He is a perfect black man, and yet somehow his perfection seems like a perfectly natural part of his character, instead of a fictional construct forced upon readers that screams “I am perfect! I am perfect!” without ever actually showing us why. So, another point in 32 CANDLES’ favor. Yay!

I’m sure there are many other reasons I can go on and on about—how the secondary characters take on lives of their own; or how the plot, while twisty and turny, wraps itself up in the most delightful and unexpected of ways—but I hope it suffices to say that 32 CANDLES will retain a permanent position on my shelf, as something I will reread whenever I want a dose of a good ole romantic comedy that won’t ever fail me. Brava, Ernessa Carter, and I want more!

Cover discussion: I like it! I like that there's clearly a black woman on the cover, and the woman's wild hair is definitely reminiscent of Davie's. At the same time, there's this sort of retro-esque funkiness in the colors that hints at the 80s, Molly Ringwald motif, as well as Davie's zaniness. Nicely done!

Copy sent for review by publisher as part of TLC Book Tours.


Ernessa T. Carter has worked as an ESL teacher in Japan, a music journalist in Pittsburgh, a payroll administrator in Burbank, and a radio writer for American Top 40 with Ryan Seacrest in Hollywood. Carter’s also a retired L.A. Derby Doll (roller derby). A graduate of Smith College and Carnegie Mellon University’s MFA program, she now lives in Los Angeles. 32 Candles is her first novel. She blogs at www.fierceandnerdy.com.

This review is part of TLC Book Tours' blog tour for 32 Candles. The next stop is tomorrow at Freda's Voice. Click here for the entire tour schedule!