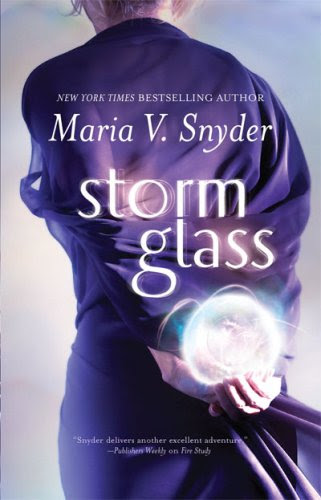 19-year-old Opal Cowan feels like a freak. She might be a powerful glass magician, but her skills are limited to just her glass. That and her connection to the events surrounding Liaison Yelena Zaltana four years earlier make her an outsider at the Magician’s Keep. Then Opal is called to investigate a case of Stormdancers’ glass orbs that have shattered, killing the Stormdancer working the magic. Opal suspects there’s a conspiracy underfoot, and between that and the newfound discovery of her magical abilities, she’s got more than enough to worry about.

Maria Snyder of the Study trilogy fame knows how to write a rollicking, quest-based fantasy, and STORM GLASS is no exception. Despite a few characterization and narration issues, it remains overall an involved read.

Opal is quite a different character than the beloved Yelena. She is shyer, much more reserved about her importance and power. Up till now, Opal’s life had been defined by her being or feeling inferior to those around her, and one of the most touching themes throughout this book is Opal’s struggle to be her own biggest fan, a theme that will resonate with lots of readers.

Snyder writes with great attention to suspense and pacing, often ending chapters on a cliffhanger so that you have to keep on reading to know what happens. This is all well and good, and makes her books fast reads, but occasionally I wondered if I wasn’t too swept up in the fast pacing, and couldn’t slow down and concentrate on the characters or their predicaments if I wanted to.

A couple elements in the story felt forced to me. Opal and Ulrick’s romance began very quickly (and out of troublingly overprotective gestures too), and I wasn’t allowed the time to warm up to Ulrick before they got together. Opal’s traumatic history seemed not to have affected her as much as Opal said it did—and then it rose up to become a significant part of this book in a way that felt, for me, a little like pulling at strings.

Overall, however, I was satisfied with STORM GLASS, and wouldn’t hesitate to read more of Maria’s works. I’d also highly recommend her books to reluctant fantasy readers. The headstrong protagonist, straightforward narration, and fast pacing will appeal to just about anyone!

Cover discussion: I absolutely love all of Maria's covers, and this one is no exception. It's simple yet beautiful in a way that evokes magic, mystery, and romance to me.

Personal copy.
Posted by Steph Su at 9:49 AM