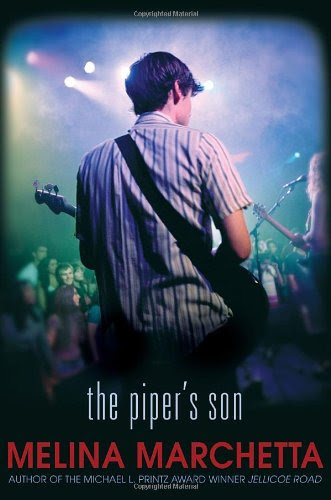 It’s been two years since Tom Mackee’s beloved uncle was killed in the London terrorist attacks, and he and his family are still reeling from it, closed off from one another in their own spheres of pain. Tom quit school and “works” at a local student union/pub alongside his former friends, who, despite his coldness towards them, have stubbornly refused to give up on him.

Tom lives with his single, pregnant aunt Georgie, who has problems of her own. She feels like she can’t let her unborn child’s father, Sam, back into her life, not after what happened between them during their years-long relationship. However, with the patient love, shared pain, and quirkiness of his friends and family, perhaps there is a way for Tom, Georgie, and everyone else to heal.

I have never read a book by Melina Marchetta that I haven’t loved, which makes her one of a kind. THE PIPER’S SON takes beloved characters from Saving Francesca and makes them hurt—makes us hurt in reading about their struggles—and yet leaves us with a story so powerful, so resonant, so complex, that it’s hard to imagine that such an accomplishment was achieved at the hands of a human being.

Readers of THE PIPER’S SON should not expect the same tone as was in Saving Francesca. THE PIPER’S SON is dark. That’s because Tom Mackee is angry. Two years after his uncle’s death and Tom is still simmering, still resentful, still pushing everyone away and not taking care of himself. You’d hate him for being so self-absorbed if it weren’t for how subtly Tom heals throughout the course of the novel.

Melina Marchetta’s characterization isn’t simply splendid. Her dialogue isn’t simply witty and spot-on—it’s revitalizing. The dialogue comes across as simultaneously natural and like the most wonderful thing you’ve ever read in fiction. The characters in THE PIPER’S SON really do come alive through their interactions with one another. Even Tom, so stuck in a cycle of self-torment is he, reveals himself to be capable of being vulnerable, of healing, of loving through his exchanges with others.

I had high expectations for THE PIPER’S SON and Marchetta didn’t let me down. THE PIPER’S SON is evidence of Marchetta’s incredible maturation as a writer since her wonderful book Saving Francesca. A must-read for Marchetta fans, and a book that will continue to astound me every time I think back to it.

Cover discussion: I don't think that's really Tom in the picture, but I do like the image--the stark contrast between cool colors and black.