A DYING LAND
The Shima Imperium is verging on the brink of environmental collapse; decimated by clockwork industrialization and the machine-worshippers of the Lotus Guild. The skies are red as blood, land choked with toxic pollution, wildlife ravaged by mass extinctions.

AN IMPOSSIBLE QUEST
The hunters of the imperial court are charged by their Shōgun to capture a thunder tiger—a legendary beast, half-eagle, half-tiger. But any fool knows thunder tigers have been extinct for more than a century, and the price of failing the Shōgun is death.

A SIXTEEN YEAR OLD GIRL
Yukiko is a child of the Fox clan, possessed of a hidden gift that would see her executed by the Lotus Guild. Accompanying her father on the Shōgun’s hunt, she finds herself stranded: a young woman alone in Shima’s last wilderness, with only a furious, crippled thunder tiger for company. Even though she can hear his thoughts, even though she saved his life, all she knows for certain is he’d rather see her dead than help her.

But together, the pair will form an indomitable friendship, and rise to challenge the might of an empire. [summary from Goodreads]

So I guess that this has been going around the blogosphere, from which I have been inexcusably absent (in terms of paying attention). When I finally saw it during my 10-something hours a day on Goodreads, I was... intrigued. Intrigued, but wary. After all, no matter how COMPLETELY AND TOTALLY BADASS that cover is (POC! POC! POC!), not to mention that synopsis, I have been led astray by pretty covers and cool-sounding synopses more times than I can count.

--but first, a close-up of the astounding cover (which is actually relevant to my upcoming point): 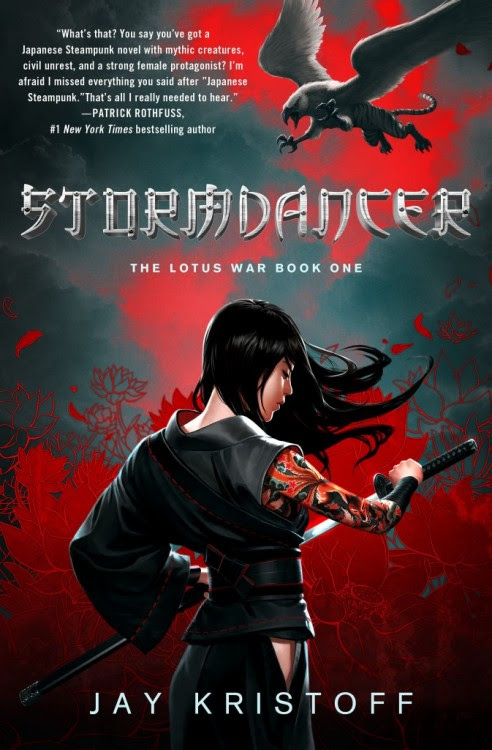 Jason Chan, I worship you. Please draw the whole world, thanks in advance.

Wuh...wahh... *wipes drool from face* What was I saying? Oh yeah. Whose blurb is that I see in the upper-left corner? Why, only PATRICK MUTHAFUGGIN ROTHFUSS. (I try not to completely curse on this blog.) He's the one who wrote the epic The Name of the Wind, which I reviewed earlier this month and basically invited into bed with me.

I take my author blurbs and author recs seriously now.

So yeah. This book. Major wanting from Steph.

Stormdancer will be released in hardcover from Thomas Dunne Books on September 18, 2012.
Posted by Steph Su at 9:00 AM