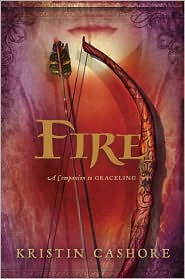 In the country of the Dells, monsters—brilliantly colored creatures with irresistible allure—roam, seduce, and terrify. 17-year-old Fire is the last human monster, born at a time when politics are deceptive and mistrust abounds. Her incredible beauty and her ability to manipulate others’ thoughts earns her admirers and enemies alike, but her life truly changes when she’s drawn out of her secluded rural home and into the capitol city to help the king discover information about the lords who are plotting an uprising. It was one thing to hide in seclusion from her father’s terrible legacy, but it’s another to use her ability in a whole other manner…

When an author’s second novel far surpasses her already critically acclaimed debut novel, you know there’s something special going on. Kristin Cashore is such an author, and FIRE is such a book. Not since Robin McKinley has an author written so convincingly of a politically charged fantasy world.

The protagonist, Fire, has the cursed gift of absolute beauty and attractiveness, and many times during the course of the book, she brings up the question, “How does gender factor into the reaction to beauty?” For Fire constantly encounters men who want to do unspeakable things to her at the very sight of her, while her equally attractive father had people falling at his feet, eager to do his bidding. Call it fantasy for sure, but FIRE contains a lot of gender politics that could make for interesting discussions, even in the classroom.

Kristin Cashore deftly unfolds Fire’s past into her present story, which helps readers slowly understand and appreciate her judgments. Even so, FIRE is an intensely emotional read, especially at the end. Its ability to affect me so strongly is one of the things I like best about it, though. The romance between Fire and Brigan is less developed than the one between Katsa and Po in GRACELING, but Kristin gives depth to all the characters, not simply the protagonist and her love interest, and I’d much rather have three-dimensionality in all my characters than in just the two main ones.

It’s difficult to say this for sure right now, but if you had to read only one hard fantasy YA book this year, FIRE just might be the one. Its blend of fantasy, romance, political intrigue, and feminism will appeal to all fantasy lovers, and then some.


Cover discussion: 4 out of 5 - So shiny and fantastical, perfect for a soon-to-be-bestselling fantasy novel and perfect as the companion novel to Graceling.