Review: Jessica's Guide to Dating on the Dark Side by Beth Fantaskey 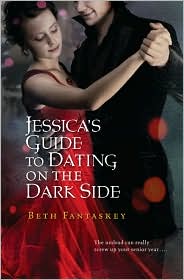 Tags: YA, paranormal, vampires, romance, war
Summary
Debut author Beth Fantaskey explodes onto the heavily populated YA vampire lit world with her amazing book, JESSICA’S GUIDE TO DATING ON THE DARK SIDE, which is sure to convert Twilight fans into having a new favorite vampire and vampire-novel heroine. Or if it doesn’t do that, then at least it will leave you smiling, biting your nails, and reading far into the night.
In rural Pennsylvania, math nerd Jessica Packwood is about to enter her senior year of high school, determined to have a good time, potentially date Jake Zinn, a nice and handsome boy in her grade, and win some more math competitions. But her carefully imagined plan goes down the drain with the arrival of Lucius Vladescu, a hot but arrogant student from Romania who is under the unfortunate delusion that he is a vampire prince destined to marry Jessica, who is apparently a vampire princess from a rival vampire family. Their marriage would end a centuries-long war between the two families and ensure peace for all their vampire relatives.
Jessica, who loves scientific facts, is understandably confused, scared of her reluctant attraction to Lucius and unable to believe the “parlor tricks” that he performs: a flash of fangs here, a miraculous recovery from a serious injury there. But just as she begins to finally believe—in Lucius, in herself—Lucius suddenly begins to court Faith Crosse, the evil-souled reigning cheerleader-slash-prom-queen of Woodrow Wilson High, and Jessica finds herself struggling to win him back, and not just for the sake of her own heart. For if she doesn’t, both vampire families, not to mention Lucius, could end up being destroyed.
Review
Wow! It is almost unfortunate that this book has such an unwieldy and frothy, though eye-catching, title, because I did not realize the extent of what I was in for when I started reading. Jessica and Lucius are two of the best main characters that I have read about in a long time: they are fully three-dimensional and undergo incredible growth through the 350-some pages. Lucius’ intensity and arrogance makes me simultaneously laugh and be attracted to him at the same time, and some of my favorite chapters were those that consisted of Lucius’ letters to his uncle back in Romania. The relationship that develops between Jessica and Lucius seems totally natural, the growing love not forced.
The plot goes beyond a typical Twilight spinoff (which all current YA vampire novels are inevitably being compared to), and reaches its awe-inspiring conclusion wonderfully. My one complaint is minor, and that is that I felt like most of the minor characters were not developed enough. However, the complexity of Jessica and Lucius’ characters—not to mention their wonderful interactions—more than made up for it, and I am happy to overlook the fact that I don’t get to know Jessica’s friends well in return for feeling immersed in Jessica’s life.
Action, love, mortal danger, family, humor—JESSICA’S GUIDE TO DATING ON THE DARK SIDE has everything. I am wholeheartedly a fan, and you will be too.