Review: And Then Everything Unraveled by Jennifer Sturman 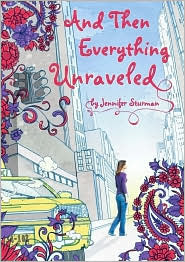 Publication date: July 1, 2009 (Scholastic)
Tags: middle grade, YA, mystery, disappearance, conspiracy
Rating: 4 out of 5
Summary
Delia knows that her mother, the unflappable, always together, perfectly organized T.K. Truesdale, would not disappear off the face of the earth without previous notice. Which is why she’s suspicious when news comes of her mother’s death on an Antarctic environmental protection expedition and Delia is shipped off to NYC to live with her two aunts.
In between making friends, dealing with a newfound crush, and trying to fit in at her prestigious private high school, Delia investigates her mother’s supposed death on the side and discovers what she already believed: her mother is not dead. There is a reason she is hiding out, but the more Delia finds out, the more sinister everything sounds, and the more danger that she and everyone she cares about might be in.
Review
Wow! How do I even begin to describe AND THEN EVERYTHING UNRAVELED, which defies categorization? It’s a mystery-suspense story wrapped around a typical girl-coming-of-age tale, and as a result it is so much more.
Delia is a darling, an unassuming high school girl with a lot of bad luck but an equal amount of smarts on her hand. In straightforward, attention-grabbing prose she tells us how the transition from California to NYC is, how living with her crazy aunts after her by-the-book mom is, and how important it is to her that she get to the bottom of this mystery with her mom. The plot is definitely the best thing about this book, for the hint of a mysterious and dangerous conspiracy in an otherwise normal YA novel is unusual, and thus delightful.
Besides for Delia, most of the other characters are interesting as well. Her aunts Charley and Patty are complete opposites of one another, and yet neither of them feel clichéd or unrealistic in their differences. Jennifer Sturman has the crazy-awesome ability to make even the most minor of characters have personality. The only character that falls slightly short in my opinion would be Quinn, Delia’s love interest, who’s gallant and noble and infuriating but still a little fuzzy in my head.
However, since the ending of this book clearly promises a sequel or two, I am confident that I will only fall more and more in love with Delia’s world. AND THEN EVERYTHING UNRAVELED is a stellar start to what promises to be an exciting, heartwarming, AND nail-biting series. Can it really get better than that?

Similar Authors
Meg Cabot
Kelley Armstrong (Darkest Powers series)
Writing: 4/5
Characters: 4/5
Plot: 4/5
Want more? Yes, please. :)
Overall Rating: 4 out of 5
Cover discussion: 3.5 out of 5 - It's...unusual! Not what come to mind first when I think back on the story (which I can't stop doing, it was that good). It looks more than a bit girlish, which is unfortunate, but that might actually encourage certain readers to pick it up, which would be fantastic.
Thank you, Sheila Marie, for giving me the honor of reviewing this great book!
Posted by Steph Su at 10:21 PM