Review: The Stolen One by Suzanne Crowley 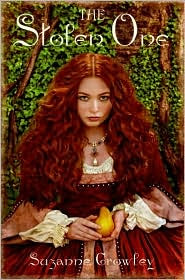 Publication date: June 30, 2009 (HarperCollins Publishers)
Tags: middle grade, YA, historical fiction, magic, Tudor England, mystery, court life
Rating: 4.5 out of 5
"Hint of Magic and Outspokenness Dazzles Tudor Book"
Summary
It is sixteenth-century England. Henry and his tyrannical ways have been disposed of, and a new queen, Elizabeth, sits on the throne. Meanwhile, in the countryside, a redheaded teenage girl named Kat Bab dreams of life beyond her simple country lifestyle. When her adoptive mother, Grace, dies, Kat considers it her opportunity to go to London and discover the identities of her biological parents.
Along with her half-deaf sister, Anna, Kat enters the queen’s court and soon becomes Elizabeth’s favorite. Jealous rumors arise, whispers that say that Kat is actually Elizabeth’s daughter. Kat, on the other hand, thinks that she was born for life in the court. Surrounded by riches and attractive men vying for her attention, however, Kat can’t help but occasionally think of the young farmer boy at home who is perhaps still waiting for her.
Will Kat learn the truth about her history, and how will she define her own future?
Review
I haven’t read such a delightful historical fiction read since probably Libba Bray’s Gemma Doyle trilogy. The sixteenth-century England that Suzanne Crowley writes is colorful, alluring (like how Kat is often described by others), and not at all stilted. It’s easy to get lost in either the rowdy, rudimentary backcountry or the deceptive yet attractive London court.
I enjoyed how the chapters with Kat’s first-person narration were divided by snippets of Grace’s old diary entries. This added even more mystery and urgency to Kat’s quest, as we readers begin to piece together what Kat herself does not yet know.
Above all, Kat’s character really made THE STOLEN ONE come alive for me. She works for me as the protagonist because of the subtle yet completely justified way she changes from countryside to courtside. She is not afraid to speak her mind, which makes for interesting conversations between headstrong or ambitious characters. I found her attractive yet normal, aspiring yet innocent.
I couldn’t get as much into the romance(s) of the story, however, partially because most of the tête-à-têtes occurred almost randomly and inexplicably. It’s okay when the main character attracts attention because of her allure; when the attraction seems ambitious and is left unexplained, however, I get worried. I also have mixed feelings about the ending of this book. Perhaps, after reading so much about Kat speaking her mind and not simply going along with what everyone expects of her, I was disappointed in her decision.
Even so, THE STOLEN ONE is a strong book with a marvelous protagonist. Anyone who enjoys historical fiction with a splash of magic and romance should read this book: it’s made for you.

Similar Authors
Libba Bray (the Gemma Doyle trilogy)
Cindy Pon (Silver Phoenix)
Eva Ibbotson
Writing: 4/5
Characters: 4/5
Plot: 5/5
Overall Rating: 4.5 out of 5
Cover discussion: 4 out of 5 - I'm occasionally slightly discomforted by the girl's steady stare, but I'm more in love with these gorgeous Greenwillow covers: the color, the saturation, oh!
I know that The Stolen One is not officially supposed to be out until June 30, but look what I found in my local Borders today! 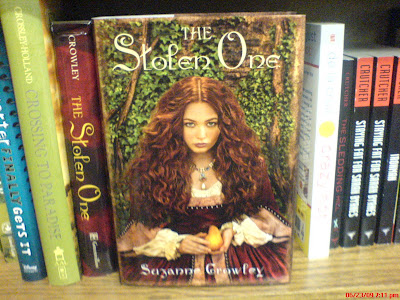