Sprout was one of the most intriguing, thought-provoking, and hilarious books I've read this year, an important addition to the GLBTQ lit world. (You can read my review of it here.) As part of a sort of blog tour that he is doing with Bloomsbury, here he is, answering a few questions. Hopefully you will be amused and your interest in Sprout will be piqued as a result! 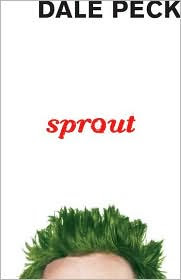 1. How did the idea for SPROUT begin? Was it triggered by a particular incident, or was it the result of a collection of ideas and opinions that have been accumulating over time?

Honestly, I was asked to write it by my editor, who thought there needed to be a different kind of gay YA novel—one that wasn’t about coming out, but about being a gay teenager, which is very different story. As soon as she suggested it, a plot more or less popped into my head. I embellished it with certain details from my own life, and voilà—a novel!

2. What made you decide to write SPROUT as a YA novel?

Well, mostly the fact that my editor only publishes children’s and YA books! But also: whether you’re writing for adults or teenagers or younger readers, you always have to think of your audience—what you want to tell them, what you think they’re looking for, etc. The high school I went to was very conservative, and the books in its library reflected that. I suppose what I wanted to do was write a book that would slip past the censors on the school board, so that kids—all kids, not just gay ones—could see a slightly different view of the world from the one they’re normally exposed to.

3. SPROUT is not a typical romance, and Sprout and Ty are not your run-of-the-mill love interests. Where did the inspiration for their characters come from? Anyone in particular inspire you?

Ty is very much based on my best friend in high school, but the relationship he has with Sprout is quite different from the one in real life. It sort of starts in the same place, but goes somewhere very different very fast. It ends up in the same place, however, since the real person also ran away at the end.

4. Sprout writes constantly about how his writing will most likely be banned in school libraries across the country. How has the response to this book's publication been? Any controversies or interesting stories to share?

No controversies so far, or at least none that I’ve heard of. So far everyone seems to really like it, which is awesome.

5. What do you foresee for GLBTQ lit in YA, a genre in which it is gaining momentum?

Mostly just that there’ll be more and more stories reflecting the diversity of adolescent experiences. Teenagers know the world is a lot more complicated than adults let on—even well-meaning adults—and they want to find out the truth. If they don’t find the books now, they’ll grow up and write them themselves.

6. As a former literary critic, what is important to you when writing a review? What do you focus on? What do you like to read in book reviews?

The most important quality for me is honesty. I don’t care what the story’s about or what style the writer goes for: tell the story the way it needs to be told and don’t dumb it down (or dress it up for that matter!) and it’ll come out well. Of course I look for qualities like inventiveness or sharp language or strongly rendered emotions, but I think these kinds of things always follow from the first step. Some stories want to be elaborate postmodern puzzles and others want to be simple and direct. As far as I’m concerned there’s no qualitative difference between the styles, just the way they’re executed. I look for the same things in reviews too: I don’t care if a critic loves or hates a book, even if it’s one I have a completely different opinion about. I just want to read an honest opinion, and the reasoning behind it.

7. If you had unlimited money to spend on a three-week vacation to anywhere in the world, where would you go and why?

I’d probably go nuts trying to figure it out, because three weeks isn’t a long time to see everything I want to see, even with unlimited money. I want to go to Italy, and India, and Peru, and Egypt. I want to see the Coliseum and New Delhi and the source of the Amazon and the Great Pyramids. You get the picture…I want to go everywhere and see everything from the miracles of nature to the wonders of great cultures, past and present. Oh, and I love world cuisine too, but the best Mexican food is in Mexico and the best Ethiopian food is in Ethiopia and the best Russian food is in Russia. I’d fly back to Barcelona just to eat at this one restaurant I had dinner in three years ago…I can still taste the langostines.

8. You are currently working on a huge project with the creator of the TV show Heroes. Besides for that, do you have any plans to write more YA?

Actually, my boyfriend just finished Sprout, and he told me I have to write a sequel. I also want to write one more book in my Drift House series, which is for middlegrade readers, but will definitel be close to YA, as the characters have become teenagers by now. So there’s that too. Beyond that, who knows? Inspiration comes at the strangest times…it wouldn’t surprise me if I wrote one or two more YAs in addition to the other projects I’ve got planned.
-
Thanks, Dale, for answering my questions, and thank you, Anna, for making this all possible in the first place! I do hope you check out Sprout, because I wouldn't be surprised if you love it as much as I do.
Posted by Steph Su at 10:36 PM