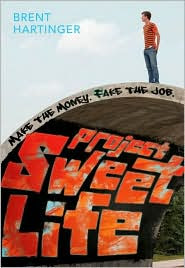 Tags: middle grade, YA, boys, boys, friendship, summer, treasure hunt
Rating: 3 out of 5
Summary
Dave and his friends Curtis and Victor are fifteen, which is the last age when having a summer job is optional. However, when all their dads insist that they get summer jobs, they know that their last summer of freedom is now officially over.
Enter Project Sweet Life, the three friends’ attempt to make their dads THINK they have jobs while they are actually simply going to raise enough money to not have to take real summer jobs! Raising seven thousand dollars can’t be that hard, right? But as their end-of-summer deadline looms and they’re forced to lie even more to their parents, it seems as if even more and more of their schemes fail.
Will they be able to raise the money they need to have one last work-free summer, or will they be punished by never being allowed to see one another ever again?
Review
PROJECT SWEET LIFE is fast-paced, funny, and a bit over-the-top ridiculous. But what can you expect, when the novel stars three hyperactive, slightly ADD, and overdramatic adolescent boys? Their frenetic scheming and failing occurs at a rapid-fire case that occasionally gave me headaches, but despite the too-fast-for-my-liking plot, I found myself cheering for Dave and his friends at the end.
Not everyone may share my problem with the plot and pacing, but I found myself too suddenly thrown into the story, into these crazy boys’ minds and actions. In the course of about 40 pages in the beginning, the boys have already gone through about three tried-and-failed moneymaking schemes. The speed of their plotting made me dizzy at first, but it got better once the story settled down into the exploration of their city of Tacoma, Washington. And by the end, I was definitely caught up with what was happening to the boys. PROJECT SWEET LIFE has a fantastic finale, the kind that is not too predictable and yet sweet enough to make readers smile and nod and say, “Yes, that is what you deserve.”
Dave, Curtis, and Victor are like the Three Musketeers, each with their separate personality. Curtis is the outgoing and talkative one, while Victor is the quieter, more geeky friend, and Dave is somewhere in between. Their different personalities don’t show themselves as well as other, similar group-of-male-friends-as-protagonists novels, but since the focus of this book is on its plot, it worked out alright in the end.
So I didn’t really like PROJECT SWEET LIFE, as too-fast pace and ridiculous schemes concocted by teenage boys are not really my thing. However, this book would make a great present for a middle school boy, one who can relate to the hyperactivity and drama of three male friends scheming to make money and thwart their parents.
Similar Authors
Don Calame (Swim the Fly)

Writing: 4/5
Characters: 3/5
Plot: 3/5
Overall Rating: 3 out of 5
Cover discussion: 3 out of 5 - So I'm not really sure what it's supposed to be a picture of, but I like the title treatment, the placement of the tagline, and the boy. It will appeal to its intended audience (middle school boys), I'm pretty sure.
Thank you, Brent, for allowing me to review your book!
Posted by Steph Su at 5:12 PM