And Then Everything Unraveled by Jennifer Sturman is a hugely enjoyable yet not well enough known novel that came out recently. I fell in love with it when I read and reviewed it last month. I had the chance to talk to Jennifer when she asked if she could quote me on her website (how could I say no?!), and she agreed to an interview! I hope you enjoy, and read on for more exciting news and a chance to read this fantastic book! 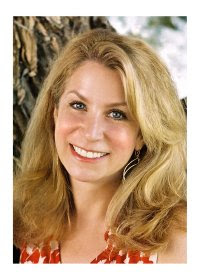 1. Where did the idea for And Then Everything Unraveled come from?

I’d been rereading one of my favorite books of all time, Auntie Mame by Patrick Dennis, which is about an orphaned boy growing up with his madcap aunt in New York City. Auntie Mame was first published in 1955, and I started thinking about how that same basic premise – orphaned kid, crazy aunt – might play out today. Of course, once I started playing with the concept, the kid became a sixteen-year-old girl who might or might not be an orphan, and the crazy aunt became more of a downtown free spirit, and I threw in another aunt who was equally crazy but in an uptight Upper East Side sort of way, and then I had to add in some mystery, and also some romance – and eventually I ended up with a story….

2. Your characters' names are all quite unusual. How did you go about picking the "right" name for each character?

The funny thing is that a bunch of the characters’ names changed in the rewrites. Delia was always Delia – there was something sunny and Californian about it that would contrast nicely with her new life in Manhattan. The three sisters, though, were originally named after the three Furies in Greek mythology: Tisiphone, Alecto, and Megaera. This was because of a minor subplot that went away after the first draft, at which point there was no reason to burden the characters with such terrible names! But by then, T.K. was already very much a T.K., so I needed a “T” for her, and given what her parents were like, I knew it would have to be stuffy and old-fashioned, so I came up with Temperance.
Meanwhile, Charley was originally going to be called Tanner (which was her middle name initially, in homage to Patrick Dennis, whose real name was Everett Tanner), but it reminded everyone of the TV show Full House, and while I still wanted her to have an unconventional name, I also wanted it to be consistent with her sisters’ names, so I struck on the Charity/Charley combination. Which left Patience, and mostly I just wanted her to have a nickname that she’d hate, and I knew she’d hate being called Patty, so I worked backward from there to Patience.
3. And Then Everything Unraveled - quite an unusual, though eye-catching and memorable, title! How did it come about?

Pretty much by accident! The working title was The Fourth Fury, because Delia’s mother and aunts were supposed to be named after the three Furies, which would have made her the fourth. Once I did away with that, though, the title no longer made any sense. So then I was thinking about how Delia’s entire life comes apart at the seams while she’s also trying to solve the mystery of T.K.’s disappearance, which led me to words like “undone” and “puzzle” and “knot.” “Unraveled” somehow got on the list, and once it did, it felt right.

4. What events or books in your childhood and teen years inspired you to write?

This is probably a boring answer, but there was never a specific trigger to wanting to write – I just always knew I would, because I loved reading so much. 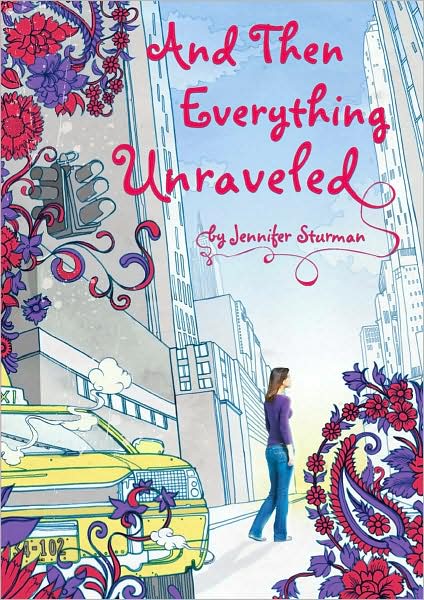 5. Will you share with us the story behind the cover of And Then Everything Unraveled?

I absolutely love the cover, but I can’t take any credit for it. Authors tend not to have much say when it comes to cover art, which in my case is good as I have no aesthetic sense. Mostly I lucked out, because the team at Scholastic did such a fabulous job with it.

7. How did you react when you read Meg Cabot's blurb for your book?
I’m a huge fan of Meg’s, so I was thrilled!

8. What are you reading right now?

I tend to have several books going at once, and it’s usually a fairly eclectic mix of genres as well as books I’m reading for the first time and ones I’m rereading. Here’s what’s currently on my nightstand: 9. Fun random question: what would the perfect meal for you consist of?

It’s very hot in New York, so I’d have to go with peaches and blueberries, or tomatoes and fresh mozzarella, or just about anything with artichokes. But in February it would be cheeseburgers or chili or something much more carnivorous.

Apparently there’s been a bit of confusion about whether Unraveled has a sequel – but it does! And Then I Found Out the Truth will be out next year, and I hope you’ll check it out when it hits the shelves.

Thank you for answering my questions, Jennifer!
-

Interest piqued yet for this fantastic book? Need another nudge? Check out Meg Cabot's: not only did she blurb Jennifer's book, she also wrote a blog entry recommending this book to all her readers, AND she linked to my review. (Thanks, Khy, for letting me know about it!) How's that for a little brush with fame for this little ole blog?!

Now that you've learned a little more about Jennifer and her latest book, here's an opportunity for you to win your own copy! Jennifer has very graciously provided a copy of And Then Everything Unraveled to send anywhere in the world--and to thank her, and to share my love, I am going to match that! So now you have TWO chances to win this fantastic book!

To enter, answer the following question: What are you reading right now?

Open: WORLDWIDE! So come and enter!

Please remember to leave your email address so I can contact you if you are a winner. Don't forget to check out Jennifer's website for more info if you're interested. Good luck!
Posted by Steph Su at 11:00 AM