Review: David Inside Out by Lee Bantle 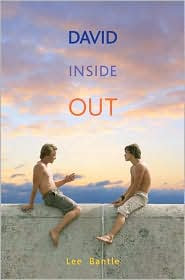 Growing up in the Midwest, David is frightened when he suspects he might have feelings for Sean, a fellow runner on the cross country team. He devises many different ways to force himself to stop thinking about Sean: self-punishment, overexertion at meets, going out with his close female friend.

But nothing seems to work, and encounter after encounter with Sean seem to push David very nearly over the edge of losing control of his emotions. Can David be true to himself when he is afraid of what the world will think of his real feelings?

DAVID INSIDE OUT is a quiet but powerful read about the complexities of coming out in a wary society. Details are sparse, and while the simplistic narration and underdeveloped characters may turn off some readers, others may appreciate those techniques as a subtle yet effective way of bringing a difficult issue to light. David’s uneven summarization of the events in his life is indicative of a confused individual attempt to sort out his emotions.

Many of the characters, unfortunately, are unlikable or feel incomplete, even though they are partially that way due to their hinted-at complexities. Their motivations are muddled or unbelievable: David’s relationship with his accepting mother seems uncomplicated to the point of childishness. I actually found that the character whose actions I understood the most was Sean, caught in between homosexual feelings and the paralyzing fear that he will lose status and acceptance if he does not continue to lead the “normal” life.

DAVID INSIDE OUT is not for the faint-hearted or innocent-minded: there are quite a number of descriptions of sexual acts. That being said, it is a fascinating look into the struggles to come out in high school, and can very well be a must-read for anyone interested in GLBTQ studies.

Thank you, Lee, for letting me review your book!
Posted by Steph Su at 9:45 AM

Email ThisBlogThis!Share to TwitterShare to FacebookShare to Pinterest
Labels: 3, lee bantle, review, YA