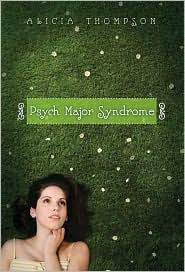 College freshman Leigh Nolan has happily escaped her psychic-loving parents for a psychology degree at a small liberal arts school. However, college life is not going the way she wants it to. Her boyfriend Andrew, whom Leigh’s been with since high school, does not seem to want to fit Leigh into his hectic academic schedule. Andrew and Leigh’s roommate, the artistic Ami, dislike one another. And Nathan, Andrew’s roommate, acts like he can’t stand even the sight of Leigh.

What’s a girl to do when her life’s a mess? As Leigh slowly navigates her various relationships, she begins to figure out who is worth it and who isn’t…and her realizations may surprise even her.

PSYCH MAJOR SYNDROME is an absolutely winsome novel, easily one of the sweetest reads this year. It’s the literary equivalent of pictures of cute kittens and puppies, and will leave you sighing happily and “aww-ing” at the end.

The book crackles with humor, mostly the result of the stellar protagonist. Leigh has just the right balance of “intelligent college student” and “blind, drama-attracting girl” to win over both lovers of intelligent AND just-for-fun fiction. Leigh’s snarky and self-deprecating narration is charmingly funny, and there are enough hints of cultural references that will make even the most well-read reader smile indulgently. PSYCH MAJOR SYNDROME takes the classic narrative formula—well-put-together main character realizes her non-debilitating blindness and overcomes that critical flaw to become a better and happier person—and rebuilds it again as something that will ring true for us. It’s tried-and-true, without making us sick of the “tried.”

PSYCH MAJOR SYNDROME has more to do with a love story than psychology, and far from being disappointed that the title and synopsis were a bit misleading, I was absolutely delighted. Without giving anything away, I just want to say that if the love interest doesn’t make your list of Top 10 Swoon-Worthy YA Boys, then you either have a hard-to-win heart, or else you recognize the few flaws in this novel that make it not nearly as enjoyable as it could be: a rushed ending, not enough character development in the one character we’d like to see developed more, and a happy ending that’s so perfect as to be a little cringe-inducing.

Ultimately, your enjoyment of PSYCH MAJOR SYNDROME may depend on how much the conventions bother you. However, I absolutely loved this novel and would pick it up again at a moment’s notice to have more than my fair share of funny, sweet, and sigh-worthy romance. Readers who adored but have for the most part outgrown Meg Cabot’s books will find a fantastic alternative in Alicia Thompson’s debut novel.


Cover discussion: 3 out of 5 - I'm not sure what it has to do with the story, or even if that model is what I picture Leigh to look like, but it does give off this calming and cute vibe, perfect for the novel.

Email ThisBlogThis!Share to TwitterShare to FacebookShare to Pinterest
Labels: 4.5, alicia thompson, review, YA