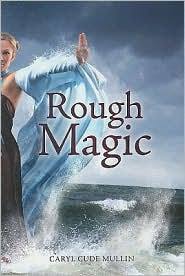 Characters of Shakespeare’s The Tempest get revisited and retold in ROUGH MAGIC. Sycorax is a sorceress whose unfortunate lot in life banishes her to live on a magical island with her ugly son, Caliban. A man named Prospero and his daughter Miranda shipwreck on the island, and Prospero makes Caliban his magical slave. Caliban returns with Prospero and Miranda to the mainland, where he befriends Miranda’s plain daughter, the princess Chiara.

To protect Chiara from being a pawn in her father’s political plans, Caliban brings her back to his island, where they must undergo a series of difficult tasks in order to restore the island’s magic. Along the way they meet Calypso, a mysterious and magical woman with connections to them that they don’t know…

ROUGH MAGIC will appeal to lovers of ambitious fantasy chronicles, but not those looking for Shakespeare-related literature or well-written characters. Indeed, I was more than disappointed especially as the premise sounded interesting and promised the discussion of issues such as feminism. Unfortunately, it is a poorly written and narratively overdone tale.

ROUGH MAGIC was difficult to swallow because it tried to tell four characters’ stories in the course of about 200 pages. The story moves over several decades and lifetimes; as a result, important, character-defining events are merely glimpses that poke in and out within one chapter, never to be mentioned again. Additionally, nearly every chapter tends to awkwardly explain in flashbacks the life-altering events that occurred since the last chapter. This skipping-stone method of narration ensures that we readers never feel as if there is any action going on, since everything important seems to have happened invisibly between the chapters!

All of the characters are weak because they did not have the time and room within the book to develop. I had immense difficulties connecting with and understanding the motivations of any character, so either vague or lumbering were they when they took up space on the pages. ROUGH MAGIC reads more like an extensive character study of four very different characters rather than an actual story.

That being said, the world that ROUGH MAGIC creates for us is a rough-and-tumble, fantastical one. I enjoyed the idea of the island’s wildness being almost a character in itself. While the enormous task of developing four characters over a period of several dozen years was ultimately unsuccessful, the storyline did bring up a number of interesting “mini-stories” that I would’ve perhaps liked to see in short story format—in particular, Sycorax’s development from reckless sorceress to repressed courtwoman under her husband’s hand.

Unfortunately, ROUGH MAGIC was not very successful in telling a clear and intelligible story, but that doesn’t mean it’s not without its attractions. Readers and writers may do well in considering this book as an example of what not to do with one’s own writing: overly ambitious and directionless saga-stories will drag a perfectly intriguing idea down to its death.


Cover discussion: 2.5 out of 5 - It's a very pretty picture that, ultimately, has very little to do with the characters or the plot. I pictured none of the female characters as looking like that.

Thank you, Jill of Second Story Press, for sending me a copy of this book for review.
Posted by Steph Su at 10:22 AM