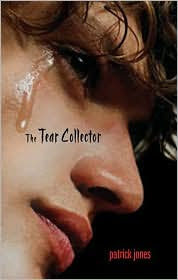 Cassandra is a unique kind of vampire, one that doesn’t drink blood. Instead, she and her family need human tears to survive, and so Cassandra is constantly volunteering at the hospital, making new friends and giving them a shoulder to cry on, breaking guys’ hearts. She feels like she is constantly sacrificing normalcy to help her family, and yet she doesn’t know what to do.

Then Cassandra meets Scott, and all of a sudden she has something worth fighting for. Cass no longer wants to be a pawn for her family, reliant on others’ misery to survive. But how can she attain a normal teenage girl’s life if she needs tears to survive, her classmates are against her, and her family holds their fate over her head?

THE TEAR COLLECTOR attempts to work an interesting spin on the well-established genre of vampire lit, but fails miserably at raising readers’ sympathies and holding their attention. The characters are flat and the interactions unbelievable.

Cassandra is an unlikable protagonist, and not because she’s a girl with questionable morals and intentions—there are many “mean girls” in YA lit whose faults and funky attitudes I embrace fully. However, Cassandra is often difficult to connect to emotionally: we hear that she is frustrated by her family, scornful of her classmates and ex-boyfriends, but we don’t see or feel it. This emotional distance makes readers unable to sympathize with Cassandra’s difficulties. She’s really a character in a fictional story, not someone who could be our classmate or a person we knew back in school.

Cassandra’s interactions with the other characters in the book are far from interesting. Most of the time, conversation falls flat as stereotypes attempt to catfight with one another…while neither of them have real claws. Cassandra and Scott’s relationship is also dull: there’s about as much successful chemistry between the two of them as remedial science classes.

Perhaps that was a bit harsh, but that’s the problem: THE TEAR COLLECTOR doesn’t know what harsh is. Jones comes up with a brilliant premise, one that could really go places, but ends up only playing on stereotypes and surface emotions. And it’s really a shame. THE TEAR COLLECTOR will appeal to those not as well read in YA vampire lit or those who are willing to overlook uninspiring writing for the sake of an original concept. Emphasis on "concept."

Thank you, Anna, for providing me with a copy for review... even when the review turned out so critical. >_<

This review is part of a Traveling to Teens tour. Visit the T2T weebly for more info!
Posted by Steph Su at 11:30 AM