Whew! I've finally recovered from BEA; moved back into my apartment for the summer; finished cleaning, organizing, and switching rooms; and figured out how to upload my BEA pictures onto my laptop. I'm ready to write my BEA wrap-up post!

It all started on Monday, May 24. I took the bus into NYC and walked the mile or so to the Javits Center to pick up my badge. The building pretty much took my breath away: a glass-enclosed structure spanning nearly four blocks, with book-related billboard advertisements. 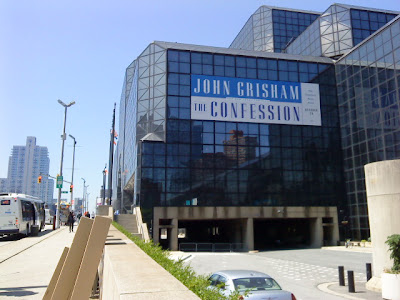 Inside, I saw workers putting this together: 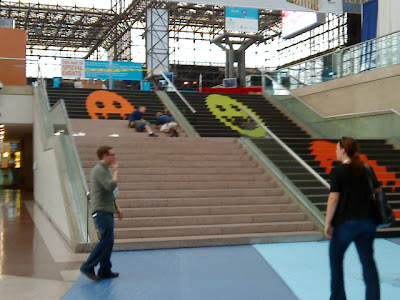 Isn't that so cool? It looked amazing too in person. I always admire people who can put these sorts of things together.

After that, I walked the three loooong-foreverrrr blocks to Penn Station, then took the train down to Union Square and the Strand (!) to meet up with some lovely bloggers and authors. Those in attendance included: Sarah Darer Littman, Amy Brecount White, Sharon from Sharon Loves Books and Cats, Drea from Book Blather, and Jess from Find the Time to Read. We had fun browsing the shelves and the ARCs. Then on our walk over to the Teen Author Carnival at the Jefferson Market Library, we met up with Holly Cupala and ran into Lauren Oliver!

Took this picture from Amy's blog. Here's Sharon and me standing next to Amy's book, which we found on the shelves at the Strand!
TAC was more organized than last year's, but still pretty hectic. The 30-something authors were divided up into three panels, each on a separate floor: Paranormal/Mystery, Real Life, and Love & Heartbreak. We only had 30 minutes or so with each panel, which overlapped into one another and made it a little crazy, but it was, as always, fun to listen to the authors talk about their thoughts about their books and the stuff they write about. I must say that the Real Life panel was incredible and set the standards high.

Afterwards, there was a loud and crazy signing session, where each author got their own "station" on several rows of children's bookshelves. I got to meet with and talk to authors Gayle Forman, Sarah Ockler, Kody Keplinger, Stephanie Kuehnert (finally!), Melissa Walker, Heidi Kling, Michael Northrop, Michelle Zink, Jeri Smith-Ready, Maryrose Wood, and probably some more. I love all of these people. Also met a bunch of bloggers, but probably not as much as I should've and wanted to, lol. I do remember having great conversations with Lenore and her husband Daniel, though.

Then the real BEA madness started on Wednesday, when the exhibits hall opened. I arrived there about half an hour late, at 9:30 (didn't want to wake up an hour earlier). By then, most of the 9am grab piles were gone, but I wandered around and got to pick up some exciting books, plus meet some people I've been in contact with for a while, such as Beth from Goodman Media at the EgmontUSA booth. I mostly just wandered around in the morning. Stood in line for Carolyn Mackler's Tangled, when I got to tell her how I've practically grown up reading all her books and love them all (and turns out her brother went to Swarthmore, and she also got accepted to Swarthmore, which just makes her cool points multiply, because NO ONE knows about Swarthmore, let alone goes there/applies there). 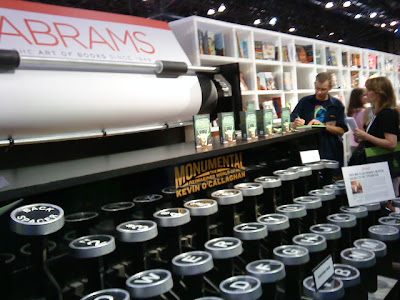 Check out the sweet huge typewriter at the Abrams booth!
When I stood in line for a beautiful limited edition signed hardcover ARC of Cornelia Funke's Reckless, I met James and Lee, authors who also run a podcasting-ish site called Authors Like Us. They were a ton of fun to talk books with, and it turns out we had a few mutual author friends/acquaintances as well.

After lunch I got to meet Talya, the lovely bookseller/ future librarian / blogger who contacted me after I WoWed S. A. Bodeen's The Gardener and offered to share with me her extra ARC! Needless to say, she is a wonderful person and we hit it off really well. We swung by the Flux/Llewellyn booth, but there was a signing there and so we scrammed out of there quickly because the crowd were heavy. We stood in several lines together, including the one for Lauren Oliver and Delirium (which I got. Haven't started it yet though. Though the temptation is GREAT)! Also met Angie of Angieville on line; it was so great meeting her in person. I also got Spirit Bound signed by Richelle Mead, which was pretty surreal. Unfortunately I was tongue-tied for the thing, and ended up not saying anything at all. *is lame* 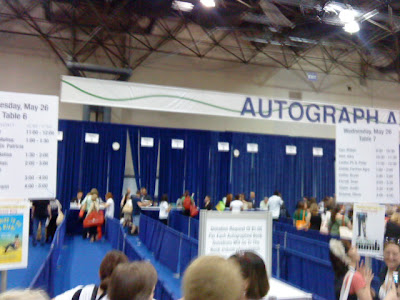 The rest of the afternoon flew by in a flurry of author signings, and soon it was time for me to go and brave the rush-hour world of public transportation to get to the new Meadowlands Stadium for Bon Jovi's first concert! And Train opened for them, which basically put me on a high starting at 7pm. The concert was amazing--Bon Jovi is a brilliant performer. But that's not a story for here--though it's a good story!

Email ThisBlogThis!Share to TwitterShare to FacebookShare to Pinterest
Labels: bea, YA event