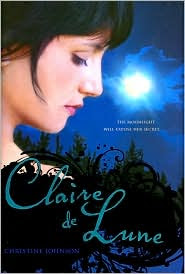 Claire’s sixteenth year was supposed to be her best yet, as her long-time crush Matthew finally starts talking to her. But then her photographer mother drops the horrifying news: Claire is going to turn into a werewolf and join the local all-female werewolf group.

The last thing Claire wants to be right now is a werewolf, especially with Matthew’s internationally known anti-werewolf father and a lone werewolf, a seule, terrorizing the community by ruthlessly killing people. Does Claire’s romance with Matthew stand a chance?

CLAIRE DE LUNE, Christine Johnson’s debut novel, is a good but not standout addition to werewolf lit. The simple way that this twist on werewolf lore is presented will make it a quick and satisfying read to ardent werewolf lovers, though it will have a tougher time winning the hearts of others.

In CLAIRE DE LUNE, Christine Johnson introduces us to a different type of paranormal world, in which only females can be werewolves. It’s not a feminist book, per se, but the dynamic that this sets up allows Claire to grow into a strong and self-reliant girl/werewolf. Here, it’s the girl protecting the boy, not the usual way around.

Having a girl be the strength in a relationship would be a great story, but the book unfortunately never fully lives up to its potential. Outside of Claire, I found the characters difficult to get to know, most of them only fitting “roles” expected to appear in a paranormal romance: the tensions among the werewolf group members, the love interest’s villainous father, the head-butting mother, etc. I never found myself fully immersed in Claire’s family dynamics, with her mother’s Type A “bad parent” personality and their rather inconsequential au pair (who’s more a red herring than a useful character, perhaps?). And all of Matthew’s father’s supposedly malevolent machinations and campaign against werewolves remained in the distant background and never fully took on immediacy.

I guess I’m just sort of extra cynical when it comes to paranormal romances nowadays: it’s going to take a lot to make something stand out for me. CLAIRE DE LUNE never reaches that point for me, but I have no doubt that it will find its audience as scores of werewolf lovers prowl the shelves for something equally supernatural and romantic after watching Twilight for the twenty-eighth time.


Cover discussion: 3 out of 5 - I wasn't initially a fan--everything just felt too...bland for a werewolf story, but it's growing on me. It's a little whimsical, which I'm not sure how well it fits the story, but I like.

ARC received from publisher.
Posted by Steph Su at 11:35 AM