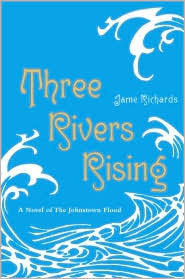 The year is 1889. Celestia, youngest daughter of a businessman, falls in love with Peter, a hired hand from the valley who works at the rich folks’ club up by Lake Conemaugh, a dammed-up lake high in the mountains, despite the impropriety of their relationship. Her family’s disapproval sends Celestia into the valley to pursue a new life with her true love. Meanwhile, elsewhere in the valley, Maura, a teenage mother, cares for her children while waiting for her train conductor husband to come home, while Kate trains obsessively to be a nurse after a devastating loss.

Celestia, Peter, Maura, Kate, and others…they have little in common with one another, until the day heavy rains destroy the dam and send an unimaginably horrifying flood rushing through the valley. Houses are swept away, families torn apart, and their lives entwine and change in ways that none of them foresaw.

THREE RIVERS RISING, Jame Richards’ debut novel, is a moving work of historical fiction, its verse format making it all the more accessible to a wider audience. The story and character development feel a little forced, however, but in spite of these problems I still found it a good read, worthy of sharing.

I had never heard of the Johnstown flood before, but it was a great backdrop for a variety of characters’ stories, and it added a deeper layer of complexity and suspense to the historical fiction. Celestia and Peter’s improper romance, in particular, was well developed, and presents to readers a moving portrait of class divisions in the late nineteenth century. The historical aspects of the book are unique, but not all-encompassing: you could probably consider this “historical fiction lite.”

Jame Richards’ verses are easy on the eyes and mind. It is happily devoid of the stiltedness that sometimes occurs in historical fiction; instead, the lines are straightforward, always more for plot and characterization than for building the setting. The sense of mounting tension we get as the moment of the flood draws nearer is spectacular. Richards’ writing and her sense of pace at crucial moments drove me forward in my reading, unwilling to put the book down.

Unfortunately, I felt that the multiple points of view contributed to the lack of thorough character development and connection. Celestia and Peter’s stories were the most developed; Maura’s and Kate’s felt sadly rushed, incomplete, and force, due to the less amount of space they are given in the novel. Switching narrators contributed to the rising suspense at the novel’s climax, but did not help me fully understand and sympathize with any of them. Dedicating the book to exploring the nuances of Celestia and Peter’s relationship would’ve probably made this a more emotionally satisfying story for me.

Additionally, the ending of the book felt unnaturally neat, which jars with our sense of the flood’s destructive power. The “perfection” of the ending brought me uncomfortably close to rolling my eyes and lowering the age range of readers I’d recommend this book to.

Despite these issues, I still overall enjoyed THREE RIVERS RISING for its unique way of approaching historical fiction. The verse was lovely, and the actual section where the flood occurs—which is what’s most important—will tug at your heartstrings. THREE RIVERS RISING is an easy historical read that can be enjoyed by a wide range of readers, from the middle school history buff to the grandparent looking for a light read on a fascinating moment in time.


Cover discussion: 4 out of 5 - I think it's so pretty! It's so unique, and that color blue is bright and eye-catching.

ARC picked up at NCTE, other review copy sent by publisher.
Posted by Steph Su at 10:07 PM