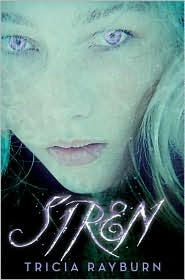 Fraidy-cat Vanessa’s gregarious older sister Justine goes cliff-diving after a family argument. When her body washes ashore, everyone thinks it was an accident, but Vanessa thinks there’s more to the story, especially when she discovers things that Justine had been hiding from them all, and when Justine’s sort-of boyfriend, their family friend Caleb, goes missing.

But soon other worrying things begin to happen in Winter Harbor, Maine. Bodies of grinning men begin washing ashore at an alarming rate, and Vanessa’s new friend’s family seems to be keeping secrets. Together with Simon, Caleb’s meteorologist older brother, Vanessa is determined to seek out the truth. But what she discovers may be bigger and more dangerous than she can handle…

SIREN was a surprisingly heartfelt supernatural YA debut. It elegantly combines ocean myth with relatable human troubles for an interesting and absorbing read.

Though the plot unfolds slowly, Tricia Rayburn accomplishes a lot when she makes Vanessa into an actually sympathetic protagonist. Despite her self-acknowledged fears (unlike many other YA paranormal romance heroines, who don’t realize they’re irritatingly passive about everything), Vanessa’s attachments to the people she loves drives her to stretch her boundaries and take risks for their sake. I found her believable and likable; in real life she’d be that reserved classmate who’s hard to get to know but worth the effort to befriend.

Ironically enough, SIREN’s strength lies in its humanity. I found myself caring very much for the main circle of characters. The brothers, Caleb and Simon, are worth their weight in hardcover. Even though it’s Vanessa’s story, Vanessa’s journey, Caleb and Simon don’t exist merely as errand-boys for her mission: they have personalities and passions of their own, too. Additionally, Vanessa’s relationship with her parents, while not the central focus of the book, is a lovely touch, from her easygoing banter with her father to tensions with her austere mother.

Sadly, the best part about this book’s supernatural element may be its novelty. For the sake of leaving you with a (mostly) clean slate, I will just say that the book is not exactly about mermaids, but something related. There’s tremendous buildup for the supernatural aspect, and I found its history within the novel’s world to be well done. However, in the ending, everything—and I do mean EVERYTHING, pretty much all the subplots—comes together so handily, so effortlessly, so… “climax-ily,” that I found my eyes bugging out, unable to believe that it had ended like that, so perfectly, so disappointingly. The ending requires a whole heap of suspension of disbelief, and I really struggled with it.

Overall, however, SIREN was an entertaining read that took me away entirely for a few hours. The ending leaves open the possibility for a sequel, and I definitely would not mind seeing what else Tricia Rayburn has for us regarding Vanessa.


Cover discussion: 2.5 out of 5 - I think I must've been in the minority when I say that this cover didn't attract me at all. I mean, what has it to do with the story? It's just a borderline disturbing picture of a really pale girl.

ARC received from trade.
Posted by Steph Su at 3:00 PM

Email ThisBlogThis!Share to TwitterShare to FacebookShare to Pinterest
Labels: 4, review, tricia rayburn, YA