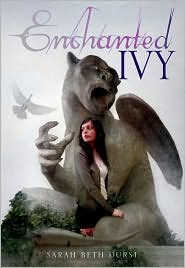 Lily Carter, Princeton legacy, visits the campus with her grandfather and sick mother and falls in love with it. A secret society that her grandfather belongs to offers her guaranteed acceptance—but only if she passes the test and finds the Key. What’s the Key? Accompanied by a cute guy named Tye, who may know more than he’s letting on to, Lily traverses the campus on her quest…and makes some shocking revelations about Princeton as well as her heritage.

For there are actually two Princetons, and the university’s famous main gate is the doorway between the Princeton we all know and the other, magical Princeton. And Lily’s family is somehow involved in the heart of a conflict between the inhabitants of the two worlds, and they might stop at nothing to possess her.

What an amazing idea for a story! Who doesn’t love tales about alternate worlds? I know I do. However, ENCHANTED IVY cut some storytelling corners that unfortunately made it hard for me to invest in the story as fully as I wanted to.

As far as the premise goes, it’s extensive, but Sarah Beth Durst does an admirable job of condensing it to a magnitude appropriate for a YA novel. She creatively reimagines Princeton’s campus as one containing magical secrets in the most obvious of places. For anyone who’s acquainted with the university’s campus, as I am, or anyone who has felt the awe-inspiring austerity of an old and regal college campus, it’s not much of a stretch to imagine the gargoyles as “hibernating” magical professors and gateways existing everywhere.

Oh, how I wish this book had gone on for another 200 or so pages! And not exactly because I didn’t want it to end, but because I think that had the book been longer, elements of the story could have been explored more thoroughly, and the book wouldn’t have given me a harried, rushed feeling as I read it. There is just so much packed into 320 pages that I don’t think many elements were allowed breathing room to grow into fully realized beings. Many of the characters seemed like flat projections of people, from the villain of the story to the boys who help Lily on her quest. In particular, when Tye proclaims to Lily within hours of them meeting each other that, due to their similarities, which I won’t divulge here because of spoilers, they are obviously soulmates, I wanted to howl, “Noooooo! How could you resort to such a paranormal romance cliché?!?!” At that point, I still felt so lost with the story that I couldn’t fully invest in Tye as a love interest yet. Likewise with the “purposes” of many other characters.

That was the danger of having the pacing of this book be all snap-snap-snap, one dramatic event/revelation after the other after the other. No sooner was one crucial key to the plot revealed, and I was still digesting it, when another piled on top, and so on. The rushed pacing unfortunately made this book read almost like a parody of its intent: I knew this book could’ve been extremely awe-inducing and breath-stealing in the best way, but I couldn’t help but feel like it attempted to do too much in too little space—oh, here’s a big bad villain! Here’s a love triangle! Here’s a heretofore unknown magical heritage! And then here’s the big bad villain’s deserved horrible ending!—that little was allowed to reach its potential.

Still, ENCHANTED IVY had the power to surprise and delight me with its twists, turns, and revelations. I particularly loved Lily’s bittersweet relationship with her fragile mother, a woman whose sanity is questionable but all the more endearing as a result of her tremulous hold on reality. If you’re the kind of reader who is often ensnared by an incredible premise, action, and a magical gothic-like setting, do give this book a try.


Cover discussion: 3.5 out of 5 - Whoa! I find it wonderfully unique and alluring. The model's pose is a little awkward, but I do love the stone gargoyle she's posing with.