Today I have on my blog Dori Jones Yang, the author of the splendid Daughter of Xanadu, which tells the tale of a female Mongolian soldier, and which I reviewed last week. Today she tells us a bit more about her book, her interest in Asian culture, and more. Welcome, Dori, to Steph Su Reads! 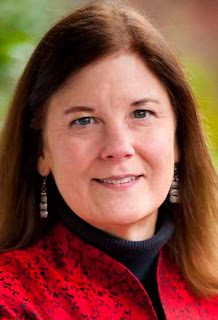 In college, I majored in European history, so I knew little about Asia. After graduation, I lived in Singapore for two years, teaching English and studying Mandarin, and that’s when I fell in love with Asia. I’ve travelled to at least 15 Asian countries and lived in Hong Kong for eight years, working as a foreign correspondent. My husband is Chinese, and our daughter was born in Hong Kong.

2. What inspired you to write Emmajin's story?

The white, European outlook on history is well known, but the perspectives of women – and especially of Mongols – have been largely overlooked. The real Marco Polo wrote about what he saw in China, but what did Asians think of him? That’s the unusual viewpoint I wanted to imagine and convey. 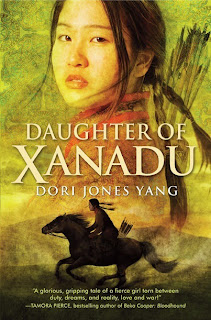 3. What sort of personal and research sources did you drawn from to create your version of Marco Polo?

My copy of Marco Polo’s book has lots of sticky notes in it, from my many readings of it. But I went beyond that. Marco says the Khan asked him to tell stories (he was that era’s version of a novelist!), and I wondered: What kinds of stories might Marco have known? Medieval Europe’s tales were of knights and ladies – the origin of our Western ideals of romance. To Asians, especially Mongols, they must have sounded startling. How might an impressionable young woman have reacted to such tales? That set my mind on fire!

4. What is your favorite scene from Daughter of Xanadu?

It’s ironic! I’m anti-war, but my favorite scene was that of the Battle of Vochan, in chapters 28 and 29, with elephants and archers and ‘fire medicine’ explosions. I really got carried away!

5. What's the most interesting food that you've tried?

Every time I visited a traditional Mongolian nomad’s home, or ger, I was served not only fermented mare’s milk (airag), but also some weird little hard and soft cubes, often described as “Mongolian cheese.” But these are nothing like American cheese cubes. Not terribly tasty, but they must have been high-protein food easy for the Mongols to carry on long trips by horseback.

6. Tell us something you'd like to do this year that you've never done before.

Play the hand bells! I’d also really like to learn to play the Mongolian horsehead fiddle, if I can find a teacher.

7. What are some interesting facts you came across in doing research for Daughter of Xanadu that didn't end up making it into the book?

I did a lot of research about gunpowder, which was invented in ancient China but for centuries mainly used to make noise at happy celebrations. It seems gunpowder was first used in warfare in China against the Mongols in the early 13th century. By the early 14th century, Europe and the Middle East both were using gunpowder in cannons during battles. So Marco Polo’s era was the exact moment in history when gunpowder spread from East to West and changed the nature of warfare forever. There is no evidence that Marco Polo brought gunpowder to Europe, but someone did at that time.

8. Can you share with us anything about any of your future writing projects?

Hmmm. I’d love to write a sequel to Daughter of Xanadu – if enough readers are interested. What do you think?

Thanks, Dori! Check out the book trailer below if you're interested:

Now, I have a finished copy of Daughter of Xanadu, and I'd like to give it away to a lucky reader! To enter, please fill out the form here, being sure to answer the entry question relevantly. This giveaway is open to US mailing addresses only, and ends Friday, February 4, 2011. Good luck!
Posted by Steph Su at 9:20 AM