Waiting on Wednesday (97): The Sequel Edition

There are so many sequels I'm anticipating that I think it's better off if I just put them all here, in one WoW post!

All summaries from Goodreads. And, uh, I suppose you might not want to read them if you haven't read the first books yet:

It's been two years since Conrad told Belly to go with Jeremiah. She and Jeremiah have been inseparable ever since, even attending the same college-- only, their relationship hasn't exactly been the happily ever after Belly had hoped it would be. And when Jeremiah makes the worst mistake a boy can make, Belly is forced to question what she thought was true love. Does she really have a future with Jeremiah? Has she ever gotten over Conrad? It's time for Belly to decide, once and for all, who has her heart forever.

The love triangle between Belly, Conrad, and Jeremiah is to die for. Seriously. It is incredibly well written and I have no idea how it'll all turn out, since I love both boys. Can a happy ending exist for all three beloved characters? We'll find out soon enough!

We'll Always Have Summer will be published in hardcover by Simon & Schuster on April 26, 2011. 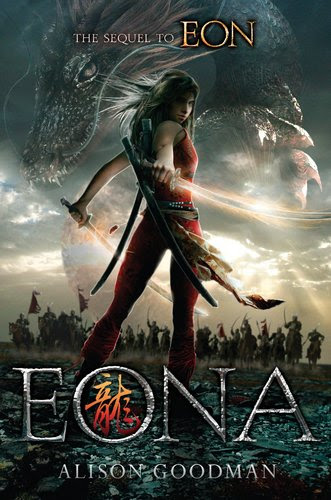 Eon has been revealed as Eona, the first female Dragoneye in hundreds of years. Along with fellow rebels Ryko and Lady Dela, she is on the run from High Lord Sethon's army. The renegades are on a quest for the black folio, stolen by the drug-riddled Dillon; they must also find Kygo, the young Pearl Emperor, who needs Eona's power and the black folio if he is to wrest back his throne from the selfstyled "Emperor" Sethon. Through it all, Eona must come to terms with her new Dragoneye identity and power--and learn to bear the anguish of the ten dragons whose Dragoneyes were murdered. As they focus their power through her, she becomes a dangerous conduit for their plans. . . .

Eona, with its pulse-pounding drama and romance, its unforgettable fight scenes, and its surprises, is the conclusion to an epic only Alison Goodman could create.

The first book, Eon, bowled me over, first with how incredible a world Alison Goodman had built, and then by how much it reminds me of timeless fantasy classics written by greats such as Robin McKinley, Gail Carson Levine, Tamora Pierce, and Sherwood Smith. If any of those authors appealed to you, then get thee a copy of the first book immediately!

Eona will be published in hardcover from Viking Juvenile on April 19, 2011.

Aura’s life is anything but easy. Her boyfriend, Logan, died, and his slides between ghost and shade have left her reeling. Aura knows he needs her now more than ever. She loves Logan, but she can’t deny her connection with the totally supportive, totally gorgeous Zachary. And she’s not sure that she wants to.

Logan and Zachary will fight to be the one by her side, but Aura needs them both to uncover the mystery of her past—the mystery of the Shift.

As Aura’s search uncovers new truths, she must decide whom to trust with her secrets…and her heart.

Well, that synopsis made the series sound like another ditzy little ditty in the paranormal romance department... but Shift is so much more than that. Beautifully strong characterization and world-building--how does Jeri do it?--will lead you an ardent fan of her writing. Maybe the publishing gods will be kind and gift me with an ARC somehow, somewhere...?