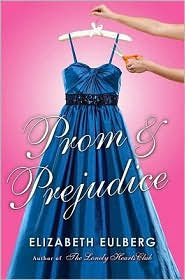 The prestigious all-girls Longbourn Academy takes two things very seriously: money, and prom. For scholarship student Lizzie Bennett, who has no interest in taking one of the stuck-up boys of Pemberley Academy to the prom, this means social suicide. Luckily she has her best friend Jane, a rich girl whose family has fallen on hard times.

Jane’s budding romance with the nice Pemberley boy Charles Bingley makes Lizzie happy, she his friend Will Darcy’s superior moneyed attitude has her seething. To make matters worse, Wick, a townie whom Lizzie meets at her local barista job, relates the story of how Darcy brought about Wick’s expulsion from Pemberley. Lizzie is ready to hate Will Darcy forever…until he overthrows all her impressions of him.

PROM AND PREJUDICE is a quick chick-litty read that will most likely raise eyebrows among loyal fans of the classic but be enjoyed by younger readers, or readers who have not experienced the wonderful nuances of Austen’s masterpiece.

Elizabeth Eulberg’s retelling reads easily and quickly, making it a good choice for a light read in between deeper books. Lizzie, with her musical talent and determination to not get caught up in her classmates’ pretentious games, is a likable protagonist. Even 200 years after Mr. Darcy was first imagined, there is still nothing like his type in terms of romantic heroes. Will Darcy obviously doesn’t hold a candle to Fitzwilliam, of course, but loyalty to Lizzie and how he tries to show that he really cares about her is adorable nevertheless.

PROM closely follows the events of the original story, translating every event into its 21st-century counterpart. Unfortunately, the thing that makes Pride and Prejudice so endearing to millions of readers—Austen’s searing social satire—doesn’t make the two-century leap. Things seem to be “flattened”: the book becomes simply a contemporary YA romance, with the difference in socioeconomic class between Lizzie and Will noted but never really used beyond it being a shallow way to make them willfully misunderstand each other.

The ridiculous characters that we enjoy so much in the original fail to fully make an appearance here: I was dying for more from Jane’s crazy family and the equivalent of Mr. Collins. And sadly, I struggled to find Will Darcy’s appeal. I suppose I was supposed to find his stiff “overtures” to Lizzie attractive, but I couldn’t help but think that the characters’ speech felt unnaturally proper, completely unlike how modern teenagers talk.

Overall, PROM AND PREJUDICE makes for a light chick lit read, but I wonder if the book’s painstaking adherence to the original, from events down to the names, doesn’t end up hurting its good intentions for some readers. I know that I was disappointed that the book seemed to lack the social satire that I enjoy most about Pride and Prejudice.


Cover discussion: 2.5 out of 5 - W...T...F? The pink, the pink, it blinds me! You would think that a retelling of one of the greatest love stories of all time would call for some attractive people on the cover, instead of this overemphasis on the ridiculous prom. *sigh*