Today I have on my blog Sherry Shahan, who is guest posting about her new book, Purple Daze, and celebrating the power of poetry, as April is National Poetry Month. Welcome, Sherry, to Steph Su Reads!

“Talk About a Revolution” The Beatles

While cleaning out my office one day, I found an old shoe box filled with letters. Most of them were written by a friend who was in Vietnam during the late 1960s. I’d kept his letters nearly 50 years, carting them with me every time I moved.

I spent hours rereading Bill’s (Phil in the novel) gut-wrenching account of his daily hell. I began to reminisce about my wild high school days.

Don't tell my two daughters, but like the character Cheryl, I used to sneak out in the middle of the night to meet friends. There’s a poem early on where the characters drive to downtown Los Angeles during the Watts Riots. They’re searching for a break in the National Guard barrier, hoping to experience things firsthand. In another poem, the characters head to Skid Row at 3 a.m. That’s the kind of crazy stuff we did!

People often ask my why I decided to tell this story in verse. I wanted to be inside the heads of each character to explore their innermost thoughts and feelings -- I used journal entries, letters, free verse and traditional poetry. To me, verse mirrors the pulse of adolescent life. Teens are emotional and self-absorbed. Condensed metaphoric language on a single page reflects their dramatic, tightly-
packed world.

Here’s a piece from the viewpoint of Ziggy. She’s one of the most troubled characters.

Fat tits + quick wit
does not = stupidity
if that’s what you think.

I think this three line poem sums up her emotional state better than if I’d written a full paragraph in margin-to-margin prose.

The following two-line poem is written from the point of view of Phil. At this point in the story, he’s been in Vietnam nearly a year:

Pages of the new testament fill my pillow,
gospels on a recon in search of a soul. 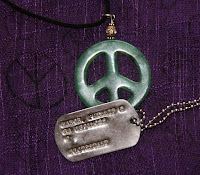 Once I began writing, memories assaulted me twenty-four-seven. It wasn't until a later draft that I began adding descriptive accounts of historical events, such as the Students for a Democratic Society’s (SDS) first antiwar demonstration and the FBI’s all-out war to discredit Dr. Martin Luther King, Jr. These entries are juxtaposed against narrative pieces about sixties rock music.

This entry was added during a late draft:

A devout Quaker and father of three young children pours kerosene over his head and sets himself on fire outside Secretary of Defense Robert McNamara’s office at the Pentagon in an act of self-sacrifice to protest United States involvement in the Vietnam War.

I’m still so very sad when I think about Norman Morrison -- that he chose to give up his life, thus abandoning his children to protest the war. The raw facts say so much about the state of our country at the time. I didn’t have to do any more than set them down on paper. Simplicity can sometimes say volumes.

Writing in this form made me aware of ‘white space’ and its importance in theme and subtext. That’s something I never thought about before. Most of my poems in Purple Daze have more white space than text. Negative space plays an important role in other art forms as well. Isn’t that what makes an object in a picture more prominent? The more negative space, the more the object stands out. A ballerina’s breathing is her white space. It’s the same way with poetry. 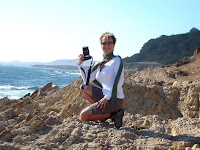 Sherry Shahan is the author of more than 30 books, including adventure novels “Frozen Stiff” and “Death Mountain.” When not snorkeling with penguins in the Galápagos, or riding horseback with
zebras in Africa, she can be found studying ballet at a local dance studio.

Purple Daze (Running Press Teens) is her first verse novel. Set in 1965, Purple Daze is a story about a volatile cultural revolution -- war, riots, feminism, racism, rock ‘n’ roll, love and friendship -- as experienced by six high school students. The themes are as relevant today as they were 50 years ago.

"A raw and stunning portrait of the 60’s. For those who lived them, Purple Daze will bring your past to life. For those who didn't, this story will make you feel as though you did." -- Catherine Ryan Hyde, author of 14 novels, including Pay It Forward
Posted by Steph Su at 9:30 AM