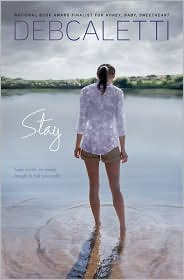 When Clara and Christian lock eyes at a busy basketball game, they feel an instantaneously intense connection to one another. Their subsequent romance is equally intense, but soon Carla realizes that things are less than perfect, as Christian displays more and more his suffocating obsession and his desperation to keep her with him.

Two summers later, Clara and her father have escaped Christian’s constant presence by moving to a small ocean town. As Carla gets to know the townspeople, some of whom have a connection with her father’s past and some with his (and her) future, she can’t shake the terror that Christian may be just a few steps away from knowing where she is, and tracking her down again.

The sad and scary fact is that people go through Clara’s situation every day. I know several friends who are in such relationships. And the terrifying thing about it is that there is only so much you can do to help those people. I wish I could give them all a copy of STAY. Deb Caletti’s latest offering spins a heartwrenching portrayal of Clara and Christian’s relationship, and Clara’s subsequent healing process. We feel the intensity of Clara’s attraction and caring for Christian, despite the fact that we know from the start that he is Bad News Bears. The horrible spiral that the relationship goes down is spun out subtly and convincingly.

The characters in STAY are lovely. Clara is a fairly relatable protagonist, not knowing exactly what she wants from her future, but smart enough to know what she does NOT want from her past. The thing is, any one of us could easily be Clara: there’s nothing about her that makes her stand out, that labels her immediately as a target for such a type of relationship. Clara handles the things within her control as best as she can, and I have to respect her for that.

I also love Clara’s relationship with her father. Clara’s father, a famous writer, is one of the most well written parent figures I have read recently in YA lit. He has a personality! He has his own interests and dreams and aspirations! He has his own quirks! Awesomeee.

I was less impressed with Clara’s new romance. Come on: the girl just went through the most difficult thing she’s had to go through in her life; doesn’t it make sense for her to take a break from romance? The romance just felt like it was in the story only because it is expected of YA stories to contain a romance. So, yeah. Not impressed. Clara also discovers shocking revelations about her family history, which was a side plot that wasn’t set up as well as the main one. It’s not bad, per se: it just felt like a lot of drama that didn’t entirely live up to its shock value.

Overall, however, STAY is one hell of a read. It’s beautiful, moving, and sometimes hurts to the bone to read. But at the end of it all, it is powerful and important—and best of all, it’s written well. Pick it up or buy it as a present for someone, please.

Cover discussion: This is a pretty generic cover. Yes, Clara goes to the water, but she goes to the ocean, not a, uh, lake, or whatever that's supposed to be.

Review copy sent by publisher. Thank you, Dawn and S&S!
Posted by Steph Su at 11:30 AM