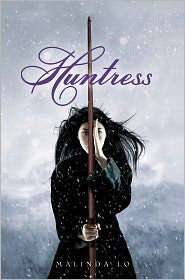 Taisin’s vision leads her and her classmate, Kaede, to accompany their kingdom’s prince, Con, on a journey to visit the Fairy Queen in her faraway city of Taninli. A strange winter has settled over the kingdom, people are starving, and unrest is brewing. They believe that the Queen may have answers to their kingdom’s perils.

But the journey to Taninli and beyond is a dangerous one. As they encounter mysterious magical creatures, Taisin and Kaede also attempt to fight their attraction to one another. Love has no place, either on this journey or in their lives: Taisin must take a vow of celibacy if she is to achieve her lifelong dream of being a Sage, and Kaede’s father wants to arrange a political marriage for her. But the connection they fight may be just the thing that might save them when they finally learn what they are facing.

Malinda Lo’s beautifully written debut novel, Ash, was one of my favorite books of 2009, and I awaited the release of HUNTRESS with trembling anticipation. HUNTRESS turned out a little differently than I had hoped, but it was still a book that had me reading with bated breath and tearing up at the end.

The strongest part of HUNTRESS is, in my opinion, the romance between Taisin and Kaede. Their romance starts out hesitatingly: both girls are scared to acknowledge their growing feelings for each other. As the story progresses, however, their romance blossoms into an innocent and utterly beautiful thing, what they aptly describe as a warm gift in the middle of all their danger and worry. Taisin and Kaede’s relationship really makes you believe in the power of love without taking it over the edge and into unbelievability.

HUNTRESS is told in a sort of old-fashioned fairy tale narrative style, which employs omniscient third-person narration. The constant shift in point of view may be a bit jarring, but it’s not wrong, especially considering the fact that books written in the nineteenth century used this literary technique all the time. However, I think it did contribute to my feeling of distance from most of the characters. I wanted more from all the characters: the constant switches in POV made it so that there didn’t seem to be a particular main character, and as a result everyone felt like a supporting character, with the potential for but not the actuality of depth.

Overall, however, HUNTRESS was a wonder-inducing fantasy read that spans time and distance. Don’t miss it particularly if you were a fan of Ash.

Cover discussion: Um, LOVE, obviously. Asian girl on a YA cover? So badass.

Received from publisher for review.

1. What was your favorite (non-spoilery) scene in HUNTRESS?

Hmm, how will I answer this? I'm afraid that all my favorite scenes are super spoilery! They're turning points in the plot, which is probably why they are my favorite. Those scenes have to be filled with a lot of emotion and there has to be a major realization or bang at the end of them.

2. What are some of your favorite fictional lesbian romances?

I love the romance between Nan and [name redacted due to spoiler!] in Tipping the Velvet by Sarah Waters. I know that doesn't really say much, but Nan has a number of romances, and I'll just say that my favorite of hers is not the first one she experiences. I also really enjoyed the romance between Loup and Pilar in Santa Olivia by Jacqueline Carey, which is a sexy dystopian about a genetically modified teen girl who grows up to be a boxer.

Neither of these books is YA, although Tipping begins when Nan is 18, and Santa Olivia ends when Loup is 18, so they're both about young women and coming of age.

3. What is the most difficult part of the writing process for you?

Every stage of writing has its difficult aspects, each unique to the stage, and honestly the most difficult part varies with each book. With Huntress, the middle of the second (or was it third?) draft was the most difficult for me; it felt like slogging through mud at times.

Here are some other parts of the writing process that have been difficult for me:

* The outline, because I just hate writing outlines, but my publisher requires them.
* The first draft, because I don't know exactly who the characters are yet.
* The second draft, because I'm now working with revision notes from my editor, and I'm trying to make the book *mean* something.
* The third draft, because now my editor is doing line-editing and asking me a bunch of specific questions that I have to actually answer.
* The final draft, because OMG it's the FINAL DRAFT and after this it will be FINISHED, so what if it totally sucks?! (panic)

The part that I love the most? Copyediting. It satisfies some deep-seated need in me to make sure all the punctuation is correct, and have extremely nitpicky discussions with the copyeditor in the margins over proper word usage.

4. What is your favorite meal of the day, and what would it ideally consist of?

I love EVERY meal of the day, but if I had to pick only one meal, I would choose brunch because it basically incorporates all the meals (ha!) and allows you have a beautiful array of beverages, too.

Here is a brunch menu I would die for:

Strong Irish breakfast tea made in the proper way with fresh boiling water!
Southern-style biscuits with sausage gravy
Fresh, in-season fruit and Greek yogurt
A side of buttermilk pancakes with maple syrup (why not?)
A spicy bloody mary

Then I'd need to go take a nap for about 3 hours.

5. Do you have any particular writing superstitions or quirky writing habits?

Yes. To begin with, every morning that I'm drafting or revising fiction, I set Mac Freedom until noon. That program disables the internet on my computer. :) (I use it again in the afternoon.)

Then I usually meditate for about 15 minutes. I have a meditation cushion in my office and I time myself with my ipod touch timer (bells ring at the end of the 15 minutes). I usually do vipassana meditation, which essentially is "just sitting." If I'm too antsy to just sit, I might count my breaths from 1 to 10 and then repeat that cyclically to keep myself focused on the breath. Sometimes I will do a loving-kindness meditation or a body scan.

After meditation, I get to work. I've noticed that if I don't meditate, it can be a lot harder for me to concentrate at first. Sometimes I just don't want to meditate (who knows why), but I try to make myself do it anyway, because it really helps.


Thank you for answering my questions, Malinda! Isn't she fantastic? You should definitely check out ASH and HUNTRESS if you haven't yet. Check out the rest of Malinda's blog tour below (organized by Ames--thank you!):