Review: The Art of Fielding by Chad Harbach 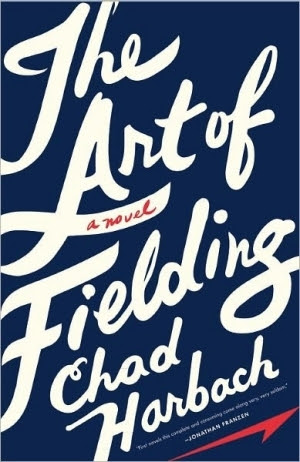 Henry Skrimshander is a good shortstop but a rural Midwestern nobody until Mike Schwartz discovers him and gets him onto the Westish College baseball team, where, under Schwartz’s careful coaching, he blooms into a brilliant Major League prospect. Henry seems on track for the dream until a terrible accident on the baseball diamond occurs and upends his confidence. If that could happen once, couldn’t it happen again and again and again?

As Henry spirals downward, however, those around him—his roommate, the college president, the president’s daughter, and Schwartz—have their own problems. And by the time the season is over, every one of them will be irrevocably changed.

I expected witty, swoonworthy college lit in a baseball setting. I got adolescent romantic angst masquerading as enlightened adult philosophizing. THE ART OF FIELDING is a decent—dare I say enjoyable?—read if you don’t go in expecting what I did, but just kind of a drag if you were expecting that.

The good: If you like odd romantic pairings, varsity athletes undergoing emotional crises, and almost-John-Green-like philosophical insights, you’ll enjoy THE ART OF FIELDING. The writing is really not bad, although definitely nothing mind-blowing. There’s a handful of witty dialogue that will let a chuckle or two escape, and if you’re a fan of the self-identifying “gay mulatto Buddhist roommate” character trope, you’ll enjoy Owen Dunne.

The not so good: While the first third was enjoyable as we witnessed Henry’s rise from good to great, the rest of the book gets bogged down in angst. And by angst, I actually mean ANGST. You have the expected angst of Henry agonizing over his mistake, but you also have the angst of some troubled maybe-lovers with childhoods that they agonize over but are never fully shown to readers, and you also have the angst of a SIXTY-YEAR-OLD MAN IN LOVE. And I’m not trying to be ageist, but rather remarking about how vomit-inducing it is to read about Affenlight’s love described using the literary equivalent of baby’s breath, rose-petal showers, and soft soft skin. If I want those kinds of descriptions of love, I’ll read Keats. I want my depictions of love grittier, less rose-tinted, more realistic, and it was a real drag for me to be subject to such descriptions of what I suppose the author believes to be “a true, perfect, and untarnished love.”

What does all this angst amount to? Not much. I don’t mind, and may even appreciate, angst if it seems justified and their reasons are shown well, but THE ART OF FIELDING doesn’t do that. Rather, we’re told that such-and-such a thing from such a character’s past has influenced him or her to act the way he or she is acting. And that’s not enough. It’s not enough for the author to just tell me, at the beginning of a chapter early on in the book, that a character had a bad childhood and daddy issues, because, by not showing this backstory, a bad childhood and daddy issues simply become lame excuses for sloppy characterization. As a result, Pella and Schwartz interact like cavemen, each one grunting obscurely things like, “So is that what you want? Yeah, that’s what I want. So that’s it? Yeah, that’s it. I hope you’re happy. You make me miserable.” I guess some romances in real life actually do pan out that way, but I couldn’t help but think that the author was projecting his desire for an ideal of the blameless relationship overcoming communicative opaqueness onto his characters, which resulted in exasperation on my part.

For those of you who arrived at this book following John Green’s recommendation, I guess I would say that this is like a third or fourth draft that a younger, less philosophically polished John Green might’ve written himself. As such, it’s enjoyable enough, if you’re in the mood for it, but otherwise there are a lot of writerly flaws within that make it a not wholly immersive for the more demanding reader.

Cover discussion: This is totally a "me" thing, because any pseudo-art script-y title doesn't do it for me at all.

Personal copy.
Posted by Steph Su at 5:00 AM