Review: The Miseducation of Cameron Post by emily m. danforth 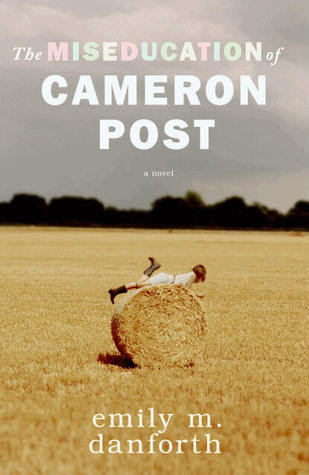 Cameron Post’s parents died in a car accident the day she kissed a girl. That, and Cameron’s conservative Montana town, sets the tone for her romantic and sexual encounters. When Cameron’s in-over-her-head romance with another girl gets discovered, she is sent off to conversion camp.

THE MISEDUCATION OF CAMERON POST couldn’t have come at a better time. In a modern world where the topic of homosexuality is so frustratingly politicized, Cameron’s story is a welcome respite. With crisp, relatable prose, unique characters that burrow themselves in your mind, and character ambiguity that marks only the most brilliant and realistic novels, THE MISEDUCATION OF CAMERON POST shapes up to be one of the best YA debuts, if not one of the best books, of 2012.

There are so many things to like about this book. I like how danforth doesn’t politicize homosexuality. The homophobic characters in the book are people too, not soulless demons who arbitrarily spew homophobic comments; the conversion therapy setting isn’t depicted as all good or all bad, but rather just is. While this may frustrate some pro-gay marriage pundits who feel like this book doesn’t take a strong enough stance on the topic of homosexuality, I appreciate its honest-to-life portrayal, the gentle admittance that, in many circumstances, it’s impossible to neatly put issues and people into boxes.

Here is a book that shows that when you don’t write down to teenagers, you’re finally getting close to writing at their level. Little separates this from an adult book except for the age of its protagonist. Cameron’s observations and musings don’t have an age limit; in fact, her thoughts don’t have any kind of label that derives from our politically and religiously charged world. This means that THE MISEDUCATION OF CAMERON POST isn’t a story about a gay girl; it’s just a story about a girl.

The book isn’t perfect—and by this I mean the extraordinarily cheesy, over-the-top ending—but danforth proves in one fell swoop that she’s no amateur when it comes to writing resonant fiction. I wholeheartedly recommend THE MISEDUCATION OF CAMERON POST to anyone with an appreciation for well-written, emotionally resonant literature, and wait with eager anticipation to see what danforth has to show readers next.

Cover discussion: At first I didn't think much of it, but it's the kind of cover that grows and grows and grows on me. I now appreciate how it doesn't try to make a statement or do any gaudy self-promotion, much like the way the book is itself. Which means that it's up to people like me to spread the word about this quietly awesome book.